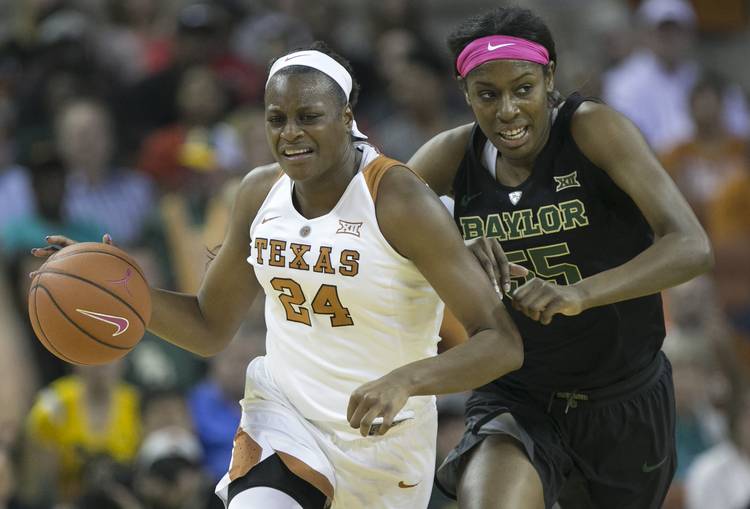 UT's Joyner Holmes, left, gets past Baylor's Khadijiah Cave in the second half at the Erwin Center in February. Holmes will rejoin the Longhorns on Dec. 23. JAY JANNER / AMERICAN-STATESMAN

Joyner Holmes, last season’s Big 12 freshman of the year, will not be enrolled or compete during the fall semester due to a university violation, Texas officials announced Saturday.

Holmes will not rejoin the team until Dec. 23. That means she’ll miss at least the first 10 games, including early-season matchups against Tennessee and Florida State.

“I take full responsibility for my mistakes and I am disappointed in my actions,” Holmes said in a statement. “I understand what a great privilege it is to be a student-athlete at the University of Texas and that is not something I take lightly.

“I am committed to using this time to focus on myself, academics and improving as a basketball player. I am looking forward to returning in December to help our team reach our goals on the court.”

As a freshman, Holmes earned All-Big 12 honors after averaging 12.1 points and a team-high 8.2 rebounds per game. She started 32 of Texas’ 34 games.

“Although I am disappointed that Joyner will not be with us in the fall semester, I am firmly convinced that she will learn and grow through this process,” Texas coach Karen Aston said in a statement. “She will rejoin us as a better version of herself and a more mature student-athlete. We will welcome her back with open arms when she returns in December.”

With Holmes’ absence, Aston and her staff will have to replace the entire frontcourt in the fall. The Longhorns were already going to be without two departed seniors, center Kelsey Lang and forward Brianna Taylor.

Texas, though, is stacked with a nation-high 10 McDonald’s All-Americans on the roster. Among the candidates who might fill the void is 6-4 post/forward Jatarie White, a transfer from South Carolina who was not eligible to play last season.

The Longhorns, who are heavy with guards, might look at forwards Jordan Hosey, Khaleann Caron-Goudreau and Audrey-Ann Caron-Goudreau to fill the paint. If Texas elects to use a three-guard system, returning starters Brooke McCarty and Ariel Atkins might be joined by sophomore Alecia Sutton or junior Lashann Higgs.

If the Longhorns choose to go young, they could shuffle in a trio of incoming freshman All-America guards — Houston’s Chasity Patterson, Rellah Boothe of Bradenton, Fla., and Destiny Littleton of La Jolla, Calif.

Holmes and Sutton will participate with USA Basketball’s U-19 national team at the FIBA U-19 World Cup in Italy. Team USA is the six-time defending champion. The event will run July 22-30 in Cividale del Friuli and Udine, Italy.