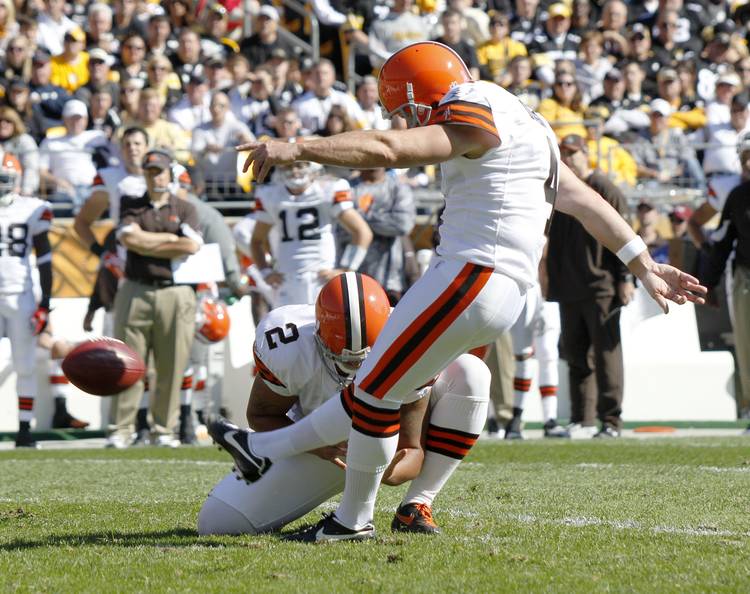 Cleveland Browns placekicker Phil Dawson, right, boots a 39-yard field goal against the Pittsburgh Steelers to pass Browns Hall of Fame kicker Lou Groza, to have the most field goals for the team, in the first quarter of an NFL football game, Sunday, Oct. 17, 2010, in Pittsburgh. (AP Photo/Keith Srakocic)

Chance are, some of this year’s eligible Longhorns won’t be taken in the NFL draft.

Many players have carved out long careers in the NFL after being overlooked in the draft. One of those players, Cullen Loeffer, played from 2004 to 2014 and was one of the best long-snappers in the NFL for the Minnesota Vikings.

Lewis wasn’t taken in the in the 2002 draft, but signed with the Seattle Seahawks. He played four seasons in Seattle, starting 12 games in 2005 when the Seahawks reached the Super Bowl and played a season in Denver before ending his career in Seattle in 2009. Lewis made 166 tackles, started 20 games and played in 79 in seven seasons.

Sendlein played in 50 games at Texas and started his final 26. He helped the Longhorns win the BCS National Championship. Then he went undrafted in 2007 and signed with the Arizona Cardinals, where he’s been an on-again-off-again member and starter on the Cardinals’ offensive line. Sendlein was the starting center this past season with the Cardinals, who reached the NFC Championship Game.  He’s started 109 games in his career.

After making 83 percent of his field goals at Texas and scoring 191 points in two seasons as the kicker (he was the punter as a freshman and sophomore) Tucker went undrafted in 2012. Four years later, a Pro Bowl appearance, a Super Bowl ring, All-pro selection, Tucker had the franchise tag placed on him by the Baltimore Ravens this offseason. Tucker has been one of the most accurate kickers in NFL history, making 139 of the 139 extra point attempts and making 87.8 percent of his field goal attempts.

Dawson was inducted into the Longhorn Hall of Honor in 2012. At Texas he was an All-American who left the program as a record holder in 13 different categories, including scoring, field goals and field goal accuracy. Despite all this, Dawson wasn’t taken in the 1999 draft and only the expansion Cleveland Browns took a chance on him.  Dawson kicked for the Browns for 14 seasons and has spent the last three kicking for the San Francisco 49ers. At the age of 40, he made 88.9 percent of his field goals in 2015. For Cleveland, Dawson scored 1,271 points making 386 field goals.

Holmes was the lead running back before Ricky Williams arrived and even paired with the future Heisman Trophy winner in 1996. Holmes never rushed for more than 524 yards at Texas and scored 20 touchdowns across his four seasons. He missed all of the 1995 season with an injury. After going undrafted in 1997, Holmes played in just seven games for the Baltimore Ravens that fall. But in 1998, Holmes broke onto the scene and rushed for 1,008 yards and seven touchdowns, which led the team. However, it wasn’t until Holmes left Baltimore and joined the Kansas City Chiefs that he became one of the best running backs in the NFL. In 2001, Holmes led the NFL in rushing with 1,555 yards and in 2002 and 2003 he led the NFL in rushing touchdowns with 21 and 27 scores.

How another Texas product could impact Jarrett Allen’s decision