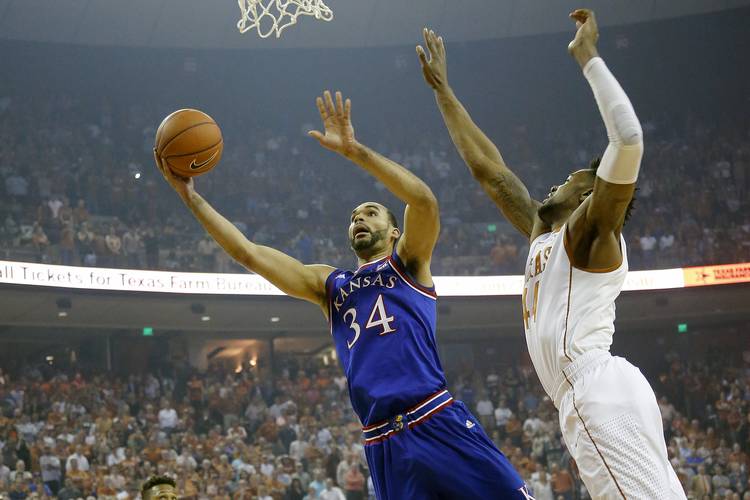 One of the most anticipated nights in recent Texas basketball history turned into a complete flop.

Kansas looked every bit like the nation’s No. 1-ranked basketball team as the Big 12 champions simply throttled the 23rd-ranked Longhorns, 86-56, before a capacity crowd Monday night at the Erwin Center.

When Jamari Traylor threw down a vicious dunk, Texas coach Shaka Smart called timeout with 13:08 remaining and UT students headed for the exits. The final tally was six shy of tying the worst home loss ever; Texas lost by 36 to Arkansas on Jan. 20. 1945.

Cowboys quarterback Tony Romo and tight end Jason Witten sat courtside along with former Texas star Colt McCoy. The 16,540 in attendance were treated to a halftime concert by Toronto rapper Tory Lanez (although some booed).

But senior night will largely be forgotten as the Horns (19-11, 10-7) shot 27 percent in the first half and never had a chance.

Ellis may not do much at the next level, but he’s an elite college basketball player. He had 26 points when these two teams met in Lawrence on Jan. 22. This time around, Ellis scored inside and from mid-range with ease. He finished with a team-high 20 points on 9 of 11 shooting with four rebounds.

Golden State may be the only basketball team on the planet that can spot someone 15 points and recover. Texas missed its first 14 shots and found itself in a deep hole early. Javan Felix finally broke the drought with a jumper after 6 minutes, 33 seconds clicked off. Then, the Horns missed five more consecutive shots later in the half and fell behind by 21. Overall, Texas was 10 for 37 shooting in the first half (27 percent). That’s worse than the first-half debacle against Baylor on Feb. 20; the Horns shot 38.1 percent in the first half against the Bears.

For the second time in three days, the Texas students came ready to rock. Hundreds lined up outside the arena and literally ran to their seats when the doors opened. There were a few thousand students packed in the upper deck an hour before tipoff, too. Also, ESPN sideline reporter Holly Rowe returned to action after a network hiatus. She recently had a tumor removed from her chest.

Not sure where to begin here. Walk-on Ryan McClurg may have jinxed things when he told those students outside to “storm the court” afterward. The 0 for 14 shooting start didn’t help matters. Demarcus Holland chased down his own missed rebound only to throw the ball off Connor Lammert’s foot for a turnover. Isaiah Taylor started the game 0 for 6 and finished with only five points.

The Longhorns close out the regular season schedule with a rare Friday trip to Stillwater to face Oklahoma State. On paper, it looks like a walk-over. The Cowboys are 12-17 overall and 3-13 in Big 12 play. There have been murmurs this will be coach Travis Ford’s swan song. After facing the Cowboys, the Horns will then look ahead to next week’s Big 12 tournament at Sprint Center in Kansas City, Mo.