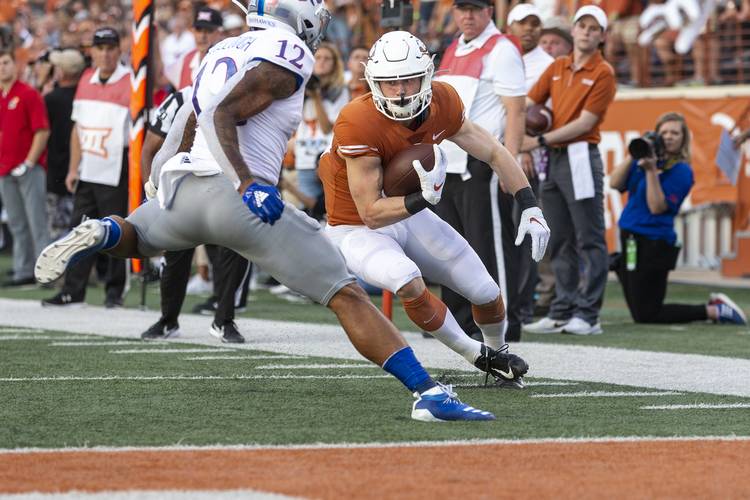 It’s halftime at Royal-Memorial Stadium. No. 15 Texas, which is a 21-point favorite tonight, is leading Kansas 21-17.

That’s right, 21-17. And for a little while, the Longhorns were trailing toward the end of the second quarter. It was the Jayhawks’ first lead in Austin since 1997.

Texas started out hot, scoring touchdowns on its first two drives, but then cooled off. That offensive slumber lasted for most of the second quarter until Brennan Eagles’ touchdown on third-and-goal at the 5 with two minutes left. Even then, it took a Joseph Ossai blocked field goal with 15 seconds left in the half to keep this from being an even tighter 21-20 game.

2. Pooka Williams is as explosive as the Longhorns should remember — he broke off a 57-yard touchdown run against Texas last year in Lawrence, and he had a 65-yard romp in the first quarter tonight. It set up KU’s first score, a short field goal.

3. Keaontay Ingram got the start and looks like he’s on his way to a 100-yard game. He has 84 yards and is averaging 9.3 yards a carry. Roschon Johnson has 25 yards and has scored a touchdown. On one drive toward the end of the half, Ingram popped free for a 32-yard gain — the second-longest run from scrimmage of the season so far for Texas — and Ehlinger added a 24-yarder, which was the fourth-longest of the season.

4. There have been two big plays so far. Both were by the Jayhawks. There was Williams’ 65-yard run in the first quarter and Stanley Carter’s 50-yard pass in the second quarter to Andrew Parchment, who beat D’Shawn Jamison on the play. The Longhorns, by contrast, have looked fairly vanilla.

5. Thought Texas’ kickoff return issues were left at the Cotton Bowl? Not so much. D’Shawn Jamison decided to make the catch as the ball was going out of bounds at the 1-yard line on the opening kickoff. It was ruled that he caught it out of bounds, however, and the Longhorns got the ball at the 35. On Jamison’s second chance, he chose to field it right at the goal line but his return went only 13 yards.

6. Quick: You’re Tom Herman, and you decide to go for it on fourth-and-2 at your own 49 late in the first quarter and leading, 14-3. What do you call? An Ehlinger keeper? A Roschon Johnson wildcat? A handoff to Johnson or Ingram? No. You direct snap it to Jake Smith; the freshman receiver was stopped one yard short of the first down.

Actually, Texas is awfully good on third downs — the Longhorns rank third nationally on third-down conversions — but fourth downs have been bumpy tonight. There was the Jake Smith run. Then, on fourth-and-2 from KU’s 40 in the second quarter, Ehlinger threw incomplete to Cade Brewer.

7. Getting defensive: Kobe Boyce made a big pass breakup on third-and-5, forcing a punt with 5:10 left in the half and Texas trailing, 17-14. … DeMarvion Overshown has flashed on two physical tackles. … And Ossai had the big field goal block.

Kansas, which won the opening coin toss, will get the ball to start the second half. Defensive end Malcolm Roach, who sat out the first half on suspension for last week’s targeting ejection, should be back on the field.