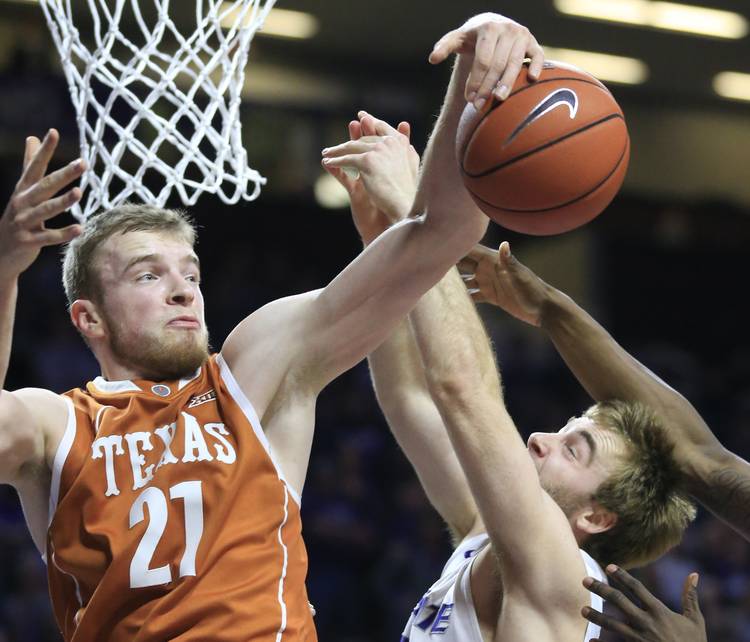 MANHATTAN, Kan. — Kansas coach Bill Self “guaranteed” reporters that Texas guard Isaiah Taylor will make it to the NBA. Other coaches have heaped similar praise on the 6-foot, 3-inch junior from Hayward, Calif.

He scored only six points in the first half. But as he’s wont to do, Taylor came alive in the second, scoring off dribble-drives and blazing around defenders en route to a team-high 19 points in a critical Big 12 road win.

Taylor cranked a 3-pointer with 43 seconds remaining to give Texas a four-point lead. Then, he hit two free throws with 31.1 seconds left. Javan Felix missed the front end of a one-and-one that might have sealed it. But K-State’s Dean Wade missed a long jumper and Taylor grabbed the rebound as time expired.

Two days after both had lackluster showings, Taylor and Felix both showed the offensive skill and drive that Texas will need come March. Both drove the lane to score early and  get the Horns going. Taylor showed his NBA-ready skill at splitting defenders, and Felix hit one of his bank shots. Taylor draining a 3-pointer over K-State’s Barry Brown with 43 seconds left was a big-league individual play.

Texas simply can’t go far this postseason with little or no contributions from centers Prince Ibeh and Shaq Cleare. Both were in foul trouble early and often against K-State. Set that aside for a second, though. Ibeh fouled out with 4:01 remaining and tallied three points and no rebounds in nine minutes. Cleare had six points and four rebounds. It’s yet another reason to get Cam Ridley (fractured foot) healthy ASAP.

Playing within yourself with three or four fouls is always difficult. Foul problems didn’t stop Connor Lammert from stepping up and hitting some big 3-pointers in the second half. Texas coach Shaka Smart called timeout after K-State cut its deficit to four, 54-50. Lammert came out of the break and calmly drilled a 3-pointer from the right wing.

The Big 12 office doesn’t comment on officiating, but there is simply no consistency from the pool of freelance contractors used by the major conferences. And this isn’t some complaint favoring Texas. It’s been wildly inconsistent night after night for schools all over the Big 12 and beyond.

Granted against the Wildcats, the Horns got called for some deserved lazy fouls, like when Prince Ibeh got two cheap whistles early and when Shaq Cleare whacked a Wildcat after getting beat on the baseline. K-State’s Stephen Hurt basically tackled Eric Davis in the lane and gets no call? It’s time the NCAA stepped in and took over officiating nationally.

The Longhorns have two power-packed home games coming up to close out the regular season. On Saturday, Texas will host No. 3 Oklahoma at 1 p.m. School officials have already indicated the game is sold out. A full house watched Texas suffer through a 78-64 loss to Baylor last weekend. Hard to imagine the Horns coming out flat against their archrival. Then, Texas hosts No. 2 Kansas on Monday.