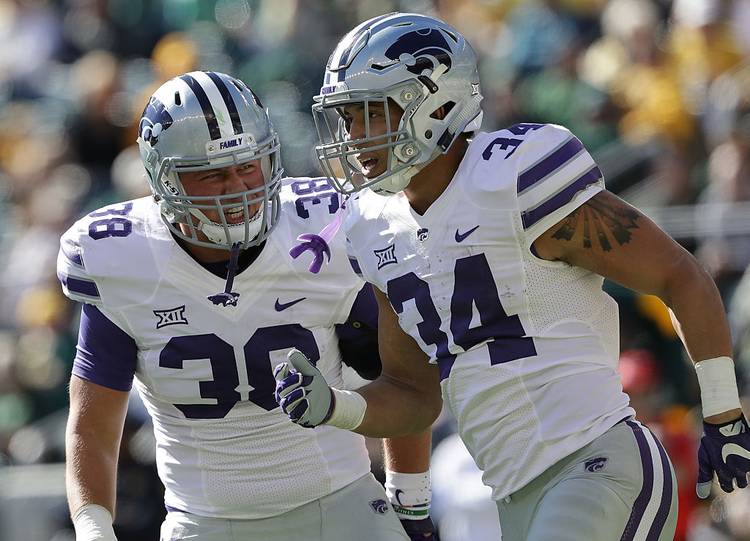 Alex Barnes #34 of the Kansas State Wildcats celebrates his touchdown with Winston Dimel #38 against the Baylor Bears at McLane Stadium on November 19, 2016 in Waco, Texas. (Photo by Ronald Martinez/Getty Images)

Cue your favorite National Geographic-style narration: In Manhattan, Kansas lives one of the last remaining examples of what was a thriving species in the American Southwest. Fullbacks used to roam on every stretch of turf across the land, picking off larger prey at will. Known for their superior instincts and legendary status as some of the toughest beasts on the planet, they’ve been displaced by slimmer, speedier creatures. Yet Winston Dimel remains. Watch how he continues to thrive in this modern landscape, doing the work of two fullbacks at once. He’s absolutely crucial to the survival of this particular pack of Wildcats.

All jokes aside, it is striking to see an old-school fullback on a team not named Navy or Georgia Tech. Dimel is a two-time All-Big 12 selection who sets the tone for Kansas State’s run-first attack. The clip above is a perfect example of how he allows quarterback Jesse Ertz to be such a dual threat. At times Dimel is even positioned as the only set back in the shotgun, shielding Ertz and preparing to take heads whenever the quarterback decides to take off. He’s certainly not in every play, but his presence provides an extra layer for teams to sift through as they prepare for the Wildcats.

Ertz had a field day against the Longhorns in 2016, and Dimel certainly played a part in the performance. Ertz passed for 171 yards and a touchdown and ran for another 78 and two scores. Watch below as Dimel opens space for Ertz’s 19-yard burst in the second quarter. The fullback also caught a pass for 12 yards.