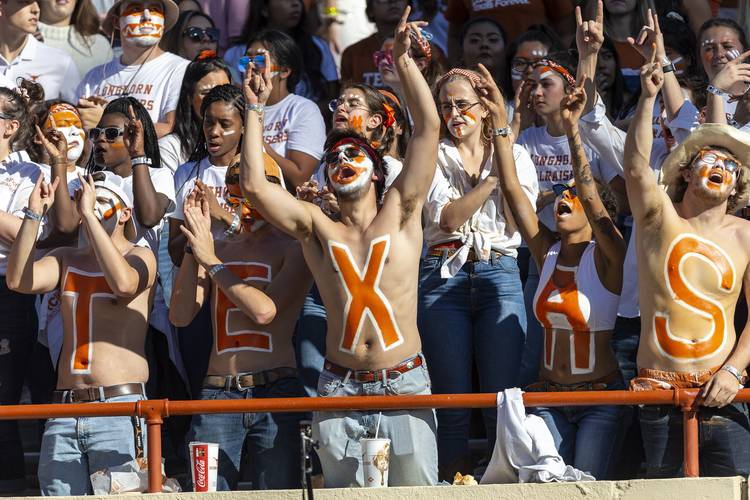 Texas fans cheer as their team competes against Kansas State in the first half of an NCAA college football game at Royal-Memorial Stadium, Saturday, Nov., 9, 2019. [Stephen Spillman for Statesman]

It’s all over at Royal-Memorial Stadium. Texas, which was a 7-point favorite today but 0-2 vs. ranked teams this year, has beaten No. 16 Kansas State, 27-24.

Texas has no wiggle room in its hope to get back to the Big 12 championship game. With three games left, that hope remains.

Whatever happened at halftime worked. The Longhorns were a different team in the third and fourth quarters on both sides of the ball. Keaontay Ingram and Collin Johnson shined, Devin Duvernay came up big with a pair of clutch completions on the final drive and the defense shut the Wildcats down after a hot start.

Texas trailed 14-0 in the first quarter and didn’t take its first lead until 9:02 left in the third quarter.

Skylar Thompson was held in check. There were the two early touchdown passes but not much after that. The Wildcats were held to only 29 yards in the third quarter. Joshua Youngblood’s 98-yard kickoff return for a touchdown turned a 24-14 Texas lead into a tight 24-21 game with 12 minutes left, but D’Shawn Jamison’s key third-down breakup of a Dalton Schoen touchdown catch ended up forcing KSU to settle for a tying field goal and gave Texas enough time to drive for the win.

There are three games left — at Iowa State, then at Baylor and then home vs. Texas Tech the day after Thanksgiving. All three will be challenging. But it’s looking like an Oklahoma win over Baylor and a Texas win over Baylor would put the Longhorns back in Arlington. That’s the plan, anyway.

And, don’t forget that with this win, Texas is officially bowl-eligible now.

1. The most interesting statistical matchup today was how each team fares on third downs. This was a classic strength vs. strength situation; Texas, with a 54% success rate, ranks No. 3 in the country in third-down conversions while Kansas State ranks No. 2 in stopping third downs — opposing teams have just a 27% clip. In fact, through eight games, K-State had allowed only 21 third-down conversions.

Today, third downs were a push.

Texas was only 4 of 11 on third-down conversions. Kansas State was just 5 of 11.

Here’s how those third down plays played out for both sides:

3rd-and-1: Ehlinger stopped a half-yard short. Punt — and some boos heard from around DKR, with 3:25 left in the first quarter and the Horns trailing 14-0.

3rd-and-4: An offsides penalty on Texas. Five yards, first down.

2. Kansas State’s Thompson was 17 of 27 for 253 yards and a pair of touchdowns, but was shut down as a runner — his biggest strength. He had seven carries for a net of 0 yards and was sacked three times.

3. The deeper we get into the season, we’re seeing Ingram regain his form. Back in October, we wondered whether Roschon Johnson, the freshman who arrived as a quarterback but has played nothing but running back out of necessity, should be starting after his 95-yard day against Oklahoma and 121 yards at West Virginia. But Ingram has been coming on. He had 101 yards vs. Kansas, 71 at TCU and 139 today.

4. As expected, Texas did get some of its notable injured players back. Caden Sterns had five tackles; B.J. Foster returned from injury and contributed half a sack, a pass breakup on a third down and one of the game’s bigger hits. But we didn’t see Jeffrey McCulloch, DeMarvion Overshown or Jordan Whittington.

Jake Smith didn’t play, either. Brennan Eagles, who was suspended for TCU, had two catches.

5. Horns up: It was a big second half for the Longhorns, who trailed 14-7 at the break but opened the third quarter with a touchdown and a field goal to take a 17-14 lead. … Brandon Jones forced a fumble in the second quarter. … Texas’ first score came on a rare flea-flicker; Roschon Johnson flipped the ball back to Ehlinger, who hit a wide-open Collin Johnson for 21 yards. That was Johnson’s first touchdown since the season opener on Aug. 31. … Jones produced a huge punt return early in the fourth, evading five tacklers for a 53-yard play down to the Wildcats’ 21. Three plays later, the Horns led 24-14.

6. Horns down: Jalen Green was ejected for targeting with a little less than 8 minutes left in the game. That set the Wildcats — who were trailing 24-21 — up at Texas’ 28. K-State ended up hitting a game-tying field goal. … Almost everyone on the offensive line had their down moments. Samuel Cosmi was flagged twice for holding, nullifying a 29-yard pass to Collin Johnson in the first half and, more importantly, a 7-yard Ehlinger gain with 5 minutes left and the game tied 24-24; Junior Angilau was injured in the second quarter and didn’t come back; Parker Braun committed an unsportsmanlike conduct penalty in the third quarter. Braun also had a false start late in the third, turning a third-and-2 into a third-and-7 (the Horns converted it). … Kansas State’s first two touchdowns came at Brandon Jones’ expense, including a bad whiff on an open-field tackle on the Wildcats’ 70-yard catch and score to open the game. … Ehlinger, who threw four picks in the loss at TCU, was picked off late in the third when he tried to force a pass to Devin Duvernay in the end zone. Duvernay was triple-covered. That cost the Longhorns points; Texas may have been able to take a 20-14 or 24-14 or 20-14 lead into the fourth quarter. Instead, it was a 17-14 game.

Next up for Texas: at Iowa State

It’ll be a 2:30 p.m. kickoff next Saturday in Ames. And it’s another must-win for the Longhorns. Iowa State is playing Oklahoma tonight.