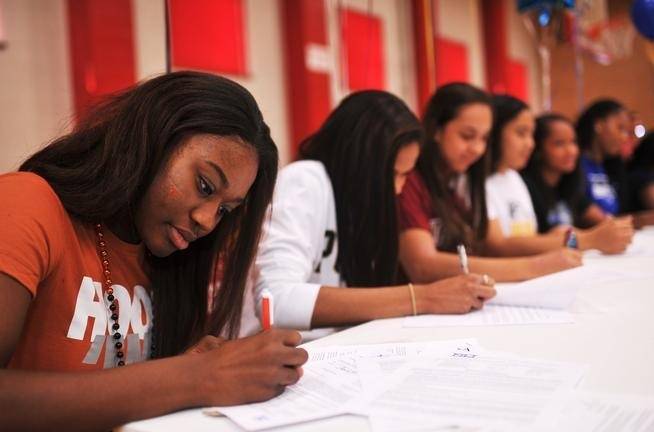 Diani Akigbogun, signing her letter of intent in 2013, will receive a medical scholarship from UT. (Photo by Hyoung Chang/The Denver Post)

Texas women’s basketball player Diani Akigbogun has been granted a medical scholarship and has concluded her playing career with the Longhorns, the university announced on Monday.

Akigbogun has suffered from bilateral knee injuries, has been advised and has elected to end her basketball career for medical reasons. She will continue to receive her scholarship to complete her undergraduate education at the university , but the scholarship will not count against the team’s 15 maximum scholarships.

“If someone had told me two years ago that, at this point, my basketball career would be over, I would probably laugh at them in disbelief,” she said.

“I’ve played this game most of my life. As I look back over the last 15 years and the relationship I created with a game that would later define me, I ache. I can’t believe it’s over. As I move forward, strong within my faith, I trust this process because I know God sees my favor and hasn’t brought me this far to leave me. I’m grateful to Texas and Coach Aston for the opportunity to be a Longhorn for two years. I’m proud of what our teams were able to accomplish and I’m excited to start this next chapter of my college career on the Forty Acres.”

Akigbogun is an Aurora, Colo., native who came to the Forty Acres as a freshman in advance of the 2014-15 season. The 2013 Gatorade Colorado Girls Basketball Player of the Year, Akigbogun played in 10 games her rookie season, averaging 3.5 minutes per game. She sat out the 2015-16 season due to injury.

“We are incredibly appreciative of the efforts Diani put forth to get back on the court this past year,” Aston said. “While she has been unable to participate on the court due to her health, her character and contributions to this program have been outstanding.”