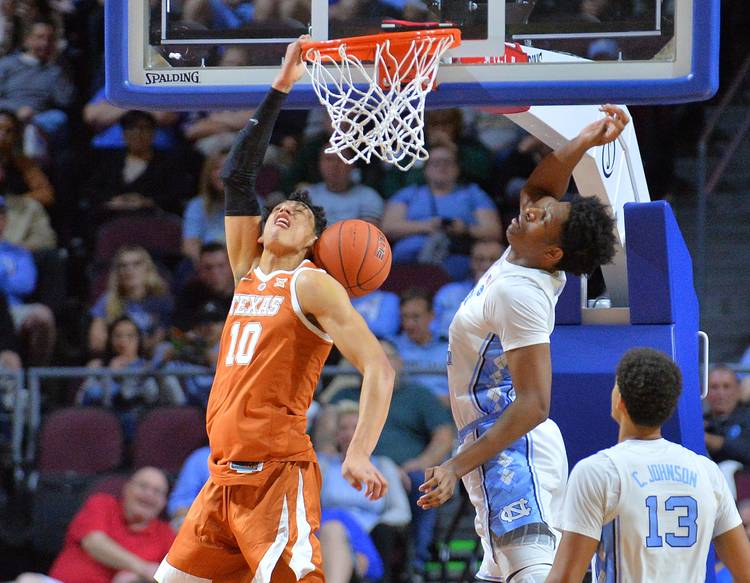 Jaxson Hayes #10 of the Texas Longhorns dunks against Sterling Manley #21 of the North Carolina Tar Heels during the 2018 Continental Tire Las Vegas Invitational basketball tournament at the Orleans Arena on November 22, 2018 in Las Vegas, Nevada. (Photo by Sam Wasson/Getty Images)

Roach scored a career-best 32 points and helped Texas hold off a late charge to beat No. 7 North Carolina 92-89 on Thursday and advance to the final of the Las Vegas Invitational.

“I just played the game the right way and didn’t want to force anything,” said Roach, who also had seven assists and six steals. “(My teammates) did a nice job creating shots. We have a blue-collar team. We have to fight to win. Last year when we lost a game to Duke like this, it was tears of sadness. Tonight, there are tears of happiness.”

Texas (5-0) plays in the championship game Friday against No. 11 Michigan State. North Carolina gets No. 17 UCLA in the consolation game.
Roach also had six rebounds and was 12 of 15 from the field, including 3 of 3 from deep. The senior topped his previous best of 26 points with an emphatic dunk with 8:27 left for a 73-65 lead.

“The best thing about him tonight was he really took the right shots and made the right reads,” Smart said. “He really got us going after a slow start. They were coming at us. They’re not going to stop shooting lights out unless we make them.”

Roach and North Carolina freshman Coby White went back and forth all game. White had 33 points, but he missed a 3-pointer that would have put the Tar Heels (5-1) ahead with 1:01 left. He was 7 of 10 from 3-point range.

White had the most points by a UNC freshman since Harrison Barnes’ 40 in 2011 against Clemson at the Atlantic Coast Conference Tournament.

Matt Coleman III had 16 points for Texas, and Jaxson Hayes had 15 points and nine rebounds. Dylan Osetkowski had 14 points, including a buzzer-beating 3 that put Texas up 43-42 at halftime.

“Our guys did a nice job managing the game against their trap defense,” Smart said. “I told the guys at halftime, we have to be the more blue-collar team. We have to be gritty. It’s not going to be beautiful basketball out there. We have to find a way to go and get those loose balls.”

Cameron Johnson had 16 points for the Tar Heels. Luke Maye had 11 points and nine rebounds, while Nassir Little had 11 points and six rebounds.
“In the first half, we took four free throws and we started taking 3-point shots and threw the ball out of bounds,” North Carolina coach Roy Williams said. “In the second half, I think our guys competed much harder.”

The Longhorns have had success against the Tar Heels, leading 8-3 in the all-time series. They also won the previous meeting in December 2015 at Austin, Texas.