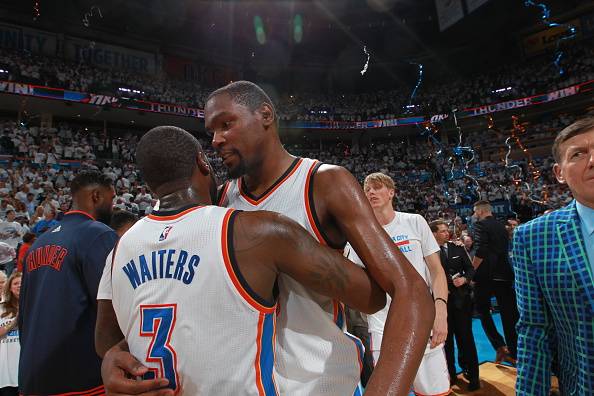 OKLAHOMA CITY, OK - MAY 8: Kevin Durant #35 of the Oklahoma City Thunder and Dion Waiters #3 of the Oklahoma City Thunder celebrate after Game Four of the Western Conference Semifinals against the San Antonio Spurs during the 2016 NBA Playoffs on May 8, 2016 at Chesapeake Energy Arena in Oklahoma City, Oklahoma. NOTE TO USER: User expressly acknowledges and agrees that, by downloading and or using this photograph, User is consenting to the terms and conditions of the Getty Images License Agreement. Mandatory Copyright Notice: Copyright 2016 NBAE (Photo by Layne Murdoch/NBAE via Getty Images)

I was watching Game 2 of the Western Conference Finals at the crib Wednesday night while working on some stuff on the laptop.  The TV was muted — I have concentration issues at my advanced age — but I noticed that OKC star Kevin Durant mouthed what appeared to be a verbal obscenity to teammate Dion Waiters after KD sank a jumper in the second quarter.

Check it out for yourself.

The Lasik surgery from 2009 has held up pretty well and while I’m not claiming to be a lip reader here, it’s looks rather obvious that Durant said something that rhymes with “Buck two” to Waiters before playfully bumping him as they walked over to the Thunder bench for a timeout.

Tell us how you really feel, KD. It all appeared to be good-natured ribbing from a veteran teammate to a youngster. Durant in a pretty candid moment was cool to see. Dude was always a great guy at Texas but over the last couple of seasons, we’ve been him let his hair down a bit and show us a different side of of his personality, which is not a bad thing, by the way. I love to get the uncensored side to these athletes outside of the usual pressers and postgame interviews.

Shoutout to the TNT cameras for capturing a funny moment from what’s shaping up to be a great series.

Too bad the refs can’t spot a traveling violation.

QB rankings: Breaking down the signal-callers Texas will face in 2016