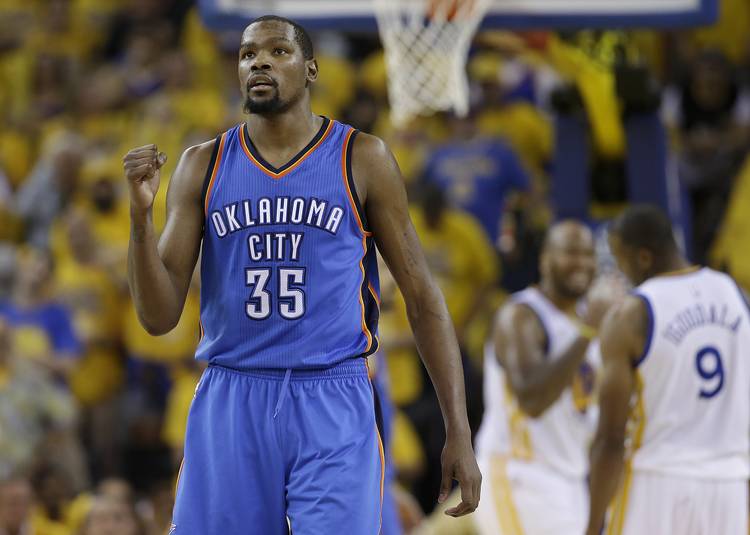 In a Monday, May 30, 2016 file photo, Oklahoma City Thunder forward Kevin Durant (35) reacts during the second half of Game 7 of the NBA basketball Western Conference finals against the Golden State Warriors in Oakland, Calif. Durant announced Monday, July 4, 2016, that he is joining All-Stars Stephen Curry and Klay Thompson with the Golden State Warriors. (AP Photo/Marcio Jose Sanchez, File)

Fans of the other 29 teams that aren't Golden State – let's have a scared group hug.

Okay so now that Kevin is on the GSW, it's understood that there team is illegal to use in 2k😂😅 #ToMuchFirePower

We need to stop acting like great players have never left to chase the chip!!! Been going on since the beginning of free agency!!! #NBA

People need to stop with the LeBron/Miami and KD/GSW parallels. Not even remotely the same thing.

Thunder GM Sam Presti on the fans of OKC and their "unconditional support" pic.twitter.com/du65FiQHXN

So @okcthunder fans are mad about @KDTrey5 leaving for the @warriors?? They sure weren't mad when they stole the @BringBackSonics.

Kevin Durant and Russell Westbrook have broken up 😂 https://t.co/TtMhchmUeu

Hey @KDTrey5, thanks for ruining my son's day. pic.twitter.com/lT15F2Hyqg

Not judging, but players are different in this era. In my day u figured out a way 2 beat 'em not join 'em. #KDtoGS #KevinDurant

Don't give a damn what anyone says: weak move by KD. You go to GSW, the team who beat you, when you're already on a title contender? Please!

Honestly, @KDTrey5 has no reason to leave @okcthunder, a contender team, they nearly beat @warriors. He turned his back on his challenge

VIDEO: Fans argue over whether Kevin Durant is a traitor https://t.co/UBko59rfvF pic.twitter.com/LB6v62vYJA

And of course … rapper Lil B, who famously cursed Durant in 2011, had to weigh in. Curse lifted?

"The BasedGod" wants to speak,As life unravels and superstars make decisions that change lifes, welcome home KD the curse is lifted – Lil B