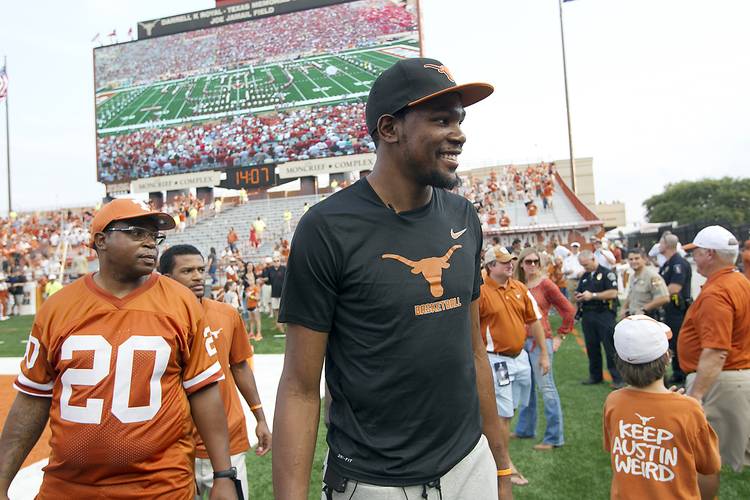 Texas-ex Kevin Durant, a NBA player for the Oklahoma City Thunder was on hand for the coin flip. Texas faltered in the second half to Ole Miss losing a non-conference game 44-23 in Austin, TX Saturday night September 14, 2013 at Darrell K. Royal Texas Memorial Stadium. The Texas fans left for the exits early in the fourth quarter with the game decided and their play not giving them anything to cheer for as the rout was on. RALPH BARRERA / AMERICAN-STATESMAN

It’s not just good news for Warriors fans. It turns out ex-Longhorn Kevin Durant’s decision to sign with the Bay Area team may in turn prove very fruitful for the University of Texas.

READ: Texas ready to dress up its athletic apparel contract

As Forbes reports, the school signed a $250 million joint apparel deal with Nike and Durant last year that’ll benefit from the star forward’s new colors. The co-branding deal awards UT royalties and was established after Durant “reached record levels in recent years compared to other pro athletes in Nike’s portfolio.” Durant’s jersey was the No. 5 most sold this past season, and, as one might guess, Silicon Valley serves a larger market than Oklahoma City. On top of that, Durant will be joining the NBA’s No. 1 team. Oklahoma was seventh.

Whether the jersey’s burnt orange, blue and orange or yellow and blue, Durant fans are buying. And the Horns are cashing in.

REACTIONS:  Kevin Durant to Golden State: Did he make the right decision?

Here is Nike’s $250 million contract with the university:

Kevin Durant to Golden State: Did he make the right decision?

Ex-Longhorn Jalen Overstreet to be in NFL supplemental draft