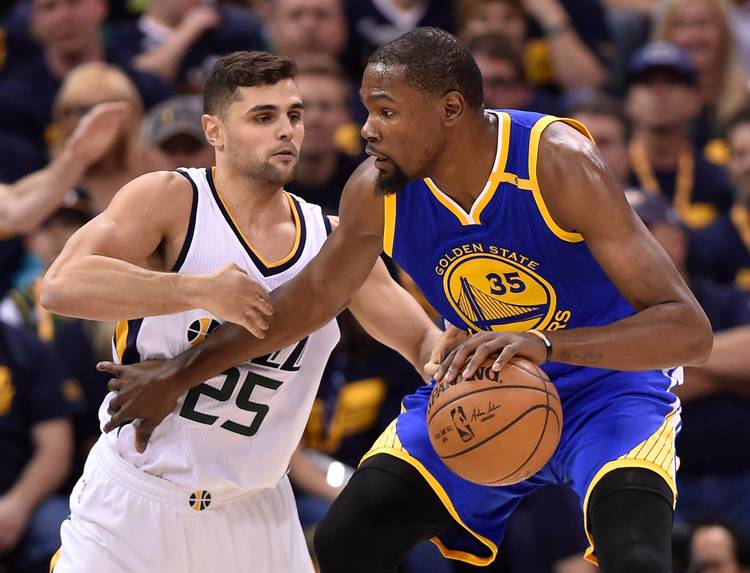 Raul Neto #25 of the Utah Jazz defends against Kevin Durant #35 of the Golden State Warriors in the first half in Game Three of the Western Conference Semifinals during the 2017 NBA Playoffs at Vivint Smart Home Arena on May 6, 2017 in Salt Lake City, Utah. (Photo by Gene Sweeney Jr/Getty Images)

The Golden State Warriors were up by ten with about a minute to play when Kevin Durant hit the dagger to seal the win over the Utah Jazz to take a 3-0 lead in the conference semifinals. This bank shot likely sealed the playoff fate of the Jazz and even had Durant shrugging at his good fortune.

Warriors' Kevin Durant banks in dagger and then hits the Jordan shrug pic.twitter.com/P4L2wPkYbx

The gesture was reminiscent of the famous Michael Jordan shrug when he couldn’t miss against the Portland Trail Blazers in the 1992 NBA Finals. Jordan made six 3-pointers in the first half on his way to 39 points.

The Bulls went on to win the series 4-2.

Durant had 22 points at the half of Game 3 and finished the contest with 38 points and 13 rebounds.

The Warriors have a couple of road bumps left before Durant can celebrate his first title. We’ll see if he can seal the deal in the next few weeks.