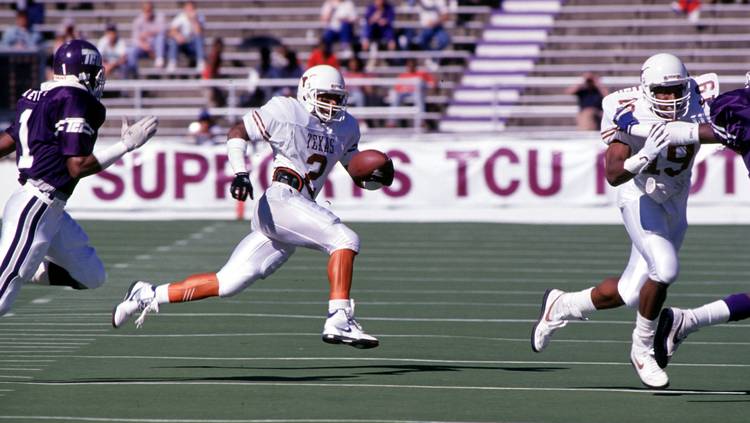 Once upon a time, our very own Kirk Bohls had a hand in the recruitment of Texas legend Eric Metcalf.

Metcalf, who on Tuesday was inducted into the Texas Sports Hall of Fame, caught up with Austin American-Statesman columnists Bohls and Cedric Golden for an episode of their podcast, “On Second Thought.”

In the episode, Bohls recalled how he provided an assist to Fred Akers, who was coaching the Longhorns at the time. The story begins around the 4 minute, 30 second mark:

I mentioned to (Fred Akers) that Eric Metcalf had not yet committed. He had been committed to Miami but had opened it up, and was going to take a visit I think the next week. Fred was very interested to say the least, and he asked me if I had Eric’s phone number. I said, ‘Yeah, I sure do. I just talked to him like 20 minutes ago.’ So I gave Fred the phone number and the rest is history.

Metcalf starred for Texas in both football and track and field from 1985 to 1988, winning Southwest Conference Player of the Year in 1987 and NCAA long jump championships in 1986 and 1988.

He wowed football fans everywhere with his versatility, and is remembered as one of if not the greatest player to pass through the 40 Acres during the 1980s. He also went on to represent Texas during a 13-year NFL career.

Had he not been in Bohls’ Rolodex, who knows what would have happened.