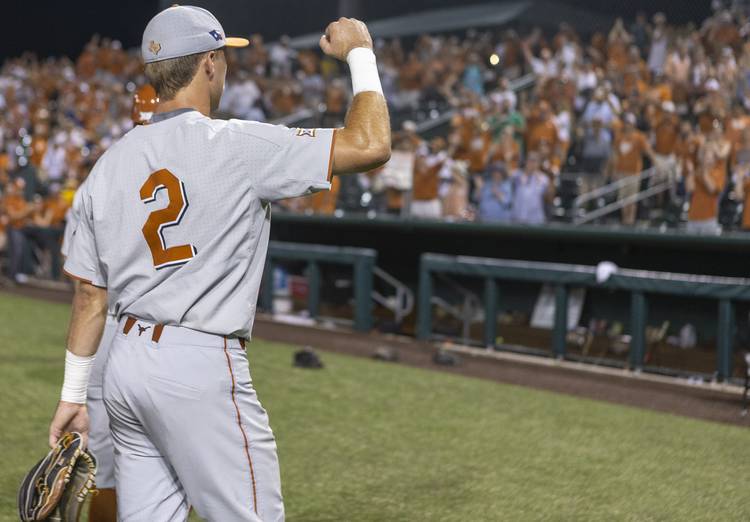 Texas' Kody Clemens motions to the cheering crowd after a 8-3 win over Texas A&M in an NCAA regional game at UFCU Disch-Falk Field on June 2, 2018. (Stephen Spillman / for American-Statesman)

Texas junior Kody Clemens is one of four finalists for the 2018 Golden Spikes Award, USA Baseball announced on Wednesday.

The Golden Spikes Award is given annually to the nation’s top amateur baseball player. Clemens is the ninth Longhorn to be named a Golden Spikes finalist. The school, however, is still looking for its first winner.

The 2018 Golden Spikes Award will be handed out on June 28. A conglomerate of media members, professional personnel and previous recipients of the award will choose this year’s winner. A fan vote will account for five percent of the decision.

Clemens has already been named the Big 12’s Player of the Year this season. He’s been dubbed an All-American by both Collegiate Baseball and Baseball America. Clemens will soon find out if he’s a finalist for the Dick Howser Trophy.

In this week’s MLB Draft, Detroit used a third-round pick to select Clemens.

How does Clemens stack up against the other finalists?

Three of the four finalists are still playing baseball. Auburn and Florida, in fact, will meet in a super regional this week. Meanwhile, Texas (40-20) is set to host Tennessee Tech (52-10) in a best-of-three series that begins on Saturday afternoon.

Texas History: Counting down the 5 moments that shaped the Mack Brown Era: No. 4 Mack picks Colt