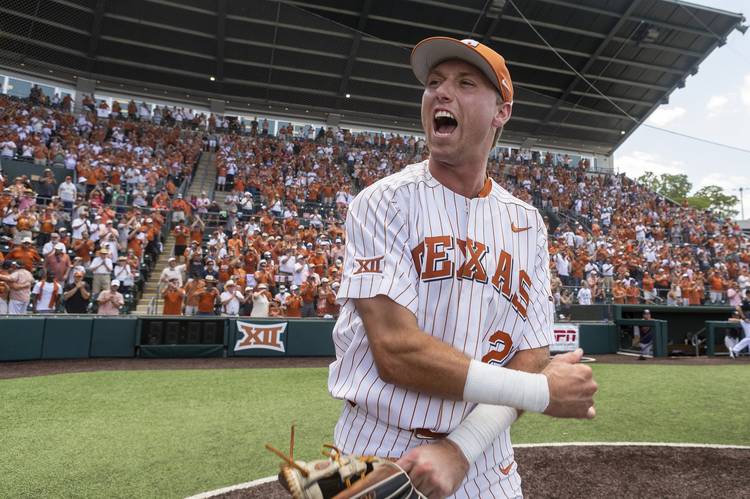 Kody Clemens grew up around baseball. His family lived and breathed the game.
He and his brothers grew up watching their father, Roger Clemens, become one of the most dominating pitchers in major league history.
Kody watched as his older brothers followed the family tradition of becoming professional baseball players.
It is finally his turn.
After being drafted in the third round by the Detroit Tigers, Clemens is enjoying his first weeks of professional baseball as a member of the West Michigan Whitecaps.
“It meant a lot. It was a dream come true. I have been working my butt off my whole life to fulfill this dream. It was an unbelievable feeling,” said Kody, who recently finished his career at Texas as a runner-up for the Golden Spikes Award. “I was at practice when they called me. I left and they told me I was going to be picked first in the third round. I was back at my apartment and my mom and grandma and dad were there. It was really cool to experience it with them. My mom started tearing up and my dad was just fired up.
“It was awesome. We all compete with each other, which helped us grow as baseball players and grow as men.”

It is a special bond that the family has centered around the game.
“My older brothers taught me a lot, and I still use that knowledge today. My dad taught me a lot. To have all boys in the family was a lot of fun,” he said. “As soon as I got an offer from UT, I immediately knew I was going there. My dad went there and my older brother was there.”
Clemens was named the American Baseball Coaches Association Co-Player of the Year after batting .351 with 24 home runs and leading the Longhorns to the College World Series.
“It was just my plate discipline, maturing as a hitter and understanding what the pitcher was trying to do to me. I started jumping on the pitchers’ mistakes,” he said. “I have learned a lot the past year. I have just grown as a hitter.”
And he did it with his family, including father in the stands. It is an opportunity many major league players do not have when their kids are playing. But Roger Clemens was out of baseball long enough to be able to enjoy his sons’ careers.

“Being on the field and knowing your dad is up there watching you play the game that he loved is an awesome feeling. When I grow up and have a family, I definitely want to be watching my kids play baseball. I bet is a really good feeling for him. Not only one of his kids, but Kacy is and Koby did. I bet he is loving it,” Kody said.
Just like Kody is loving being a professional player. He walked with the bases loaded to give the Whitecaps a 3-2 win over Wisconsin in 10 innings on July 11.
“He has done a great job on a regular basis. He has been a positive surprise at second base. He has made some great plays at second. He is going to be someone to be reckoned with down the road,” said Whitecaps manager Lance Parrish, who played against Roger Clemens for several years. “He might be (the first I have coached after playing against their father). It is cool. I was a huge admirer of his dad. He was a great pitcher. It is nice to have that gene pool in the Tiger organization. He looks like a player. He has made a significant impact on this team just the way he carries himself and goes about his business. It is pretty obvious to me he has been around baseball his entire life.”

New football uniforms boast bigger ‘TEXAS’ — but is that orange getting less burnt?

Golden: Tim Beck could become a play-calling monster in his second season as OC