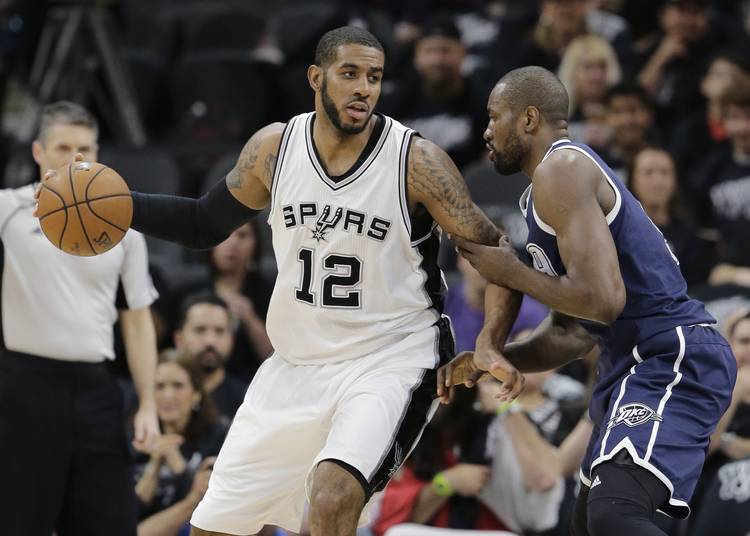 On Monday night, The Oklahoma Thunder hung on to defeat the San Antonio Spurs, 98-97 to even their Western Conference semifinals series. The star of the series so far has been former Longhorn LaMarcus Aldridge who has scored 38 and 41 points in the games, almost single-handedly willing the Spurs to victory Monday, hitting 15 of 21 shots from the field and making a perfect 10 for 10 attempts from the free-throw line.

After game one, the Statesman’s Kirk Bohls took a look on how the former Longhorn is fitting in with his new Spurs teammates:

“He was facing the biggest decision of his career a year ago but was troubled by doubt and reservations.

Should he remain at Portland where he could remain a prolific scorer and become the Trail Blazers’ biggest superstar since Bill Walton or Clyde Drexler? Would second-tier Phoenix be a great escape for him or just another Portland? The bright lights of Hollywood and a chance to become the next Kobe Bryant? How about taking his talents to South Beach? That worked out well for another great of the game.

He listened in a heart-to-heart counsel with Pat Riley, who instructed Aldridge to surround himself with a terrific supporting cast if he really wanted to win championships. He took in Spurs assistant coach Ime Udoka’s concentrated pitch on a long plane flight. He consulted with his tight inner circle.

In the end, Aldridge chose insecurity exactly because he knew it was best for him.”

On what Aldridge’s move to San Antonio did for his endorsements:

“Yeah, you could say the Spurs’ biggest free-agent acquisition in history paid off and could continue to. San Antonio was once anything but a sexy destination for free agents. Jason Kidd said no. So did Pau Gasol.

Aldridge took a four-year, $80 million deal and opted for the tight cocoon of the selfless San Antonio Spurs where players win defensive awards and around-the-league respect. Oh, and big, shiny trophies. So he chose San Antonio, the place where lucrative endorsements and the spotlight go to die. He’s landed glamorous deals with the likes of, uh, HEB.”

On Aldridge’s leadership growth this year:

Aldridge, 30, has found a home in San Antonio, and the Spurs found their next big thing and perhaps the next Tim Duncan in terms of quiet leadership and dominant play.

“He’s adapted more quickly to us than we could have imagined,” (Spurs general manger R.C.) Buford said. “He engaged our defense and very quickly picked up our rotations. LaMarcus is very respectful of our group and didn’t try to over-run the rest of the group.”

If anything, he deferred too much until a long layoff for Duncan to rest his knees in January opened the door for Aldridge to assert himself. He’s quickly done that, assimiliating himself into the Spurs’ physical scheme of constant defense and clear focus. It’s been a process, and he admits he’s still learning the nuances.”

To read the entire column on Aldridge, including who he consulsted in free agency and head coach Greg Popovich’s thoughts on him, click here.

Beau Hossler a finalist for the Ben Hogan Award

Charlie Strong ready to ‘jump in the middle’ of satellite camps