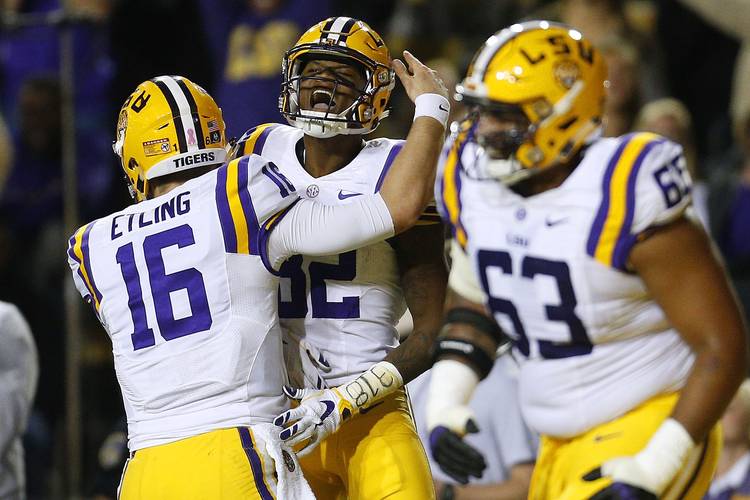 BATON ROUGE, LA - OCTOBER 22: D.J. Chark #82 of the LSU Tigers celebrates a touchdown with Danny Etling #16 during the first half of a game against the Mississippi Rebels at Tiger Stadium on October 22, 2016 in Baton Rouge, Louisiana. (Photo by Jonathan Bachman/Getty Images)

Worst-case scenario: Danny Etling, a Purdue transfer who is the only man on campus to have thrown a pass in a college game, proves a mediocre game manager, and no other quarterback is ready for the spotlight. And the back-loaded schedule with trips to Florida, Ole Miss, Alabama and Tennessee grinds down the Tigers.

The key game: Oct. 14, Auburn. And you all thought we’d type Alabama. The Tigers can’t beat the Tide anymore (0-6 since 2011). Better to concentrate on the other Alabama school, also picked ahead of LSU in the SEC media poll.

Spring cleaning: At LSU, early departures to the NFL draft are a way of life. This year there were four, including three first-rounders. … Etling, the likely starting QB, had back surgery but is recovering nicely, throwing the ball with more zip than last year. … Help is on the way from Lubbock, of all places. Texas Tech’s top WR, Jonathan Giles, transferred in; he led the Red Raiders with 69 catches for 1,158 yards and 13 TDs last fall. DT Breiden Fehoko, the Red Raiders’ top defensive recruit in more than a decade, also transferred in. Both have to sit out this year.

Life, death, taxes and Bama: It always comes back to two things — Alabama and the passing game. Les Miles was fired despite a spectacular record (114-34) because he lost five straight to Nick Saban and his staff couldn’t develop a quarterback. So now it’s on Orgeron, a popular Louisiana native but unproven head coach, and Canada, making his sixth NCAA stop since 2003. Canada has a good track record and adapts to the personnel on hand. It wouldn’t take much to outshine his predecessors. Orgeron went 6-2 at USC and LSU as an interim but was 10-25 in three disastrous years at Ole Miss. He earned his chops as a defensive assistant/recruiter. Is Orgeron miscast as a head coach?

Roll of the Guice: Believe it or not, Leonard Fournette is one guy LSU probably won’t miss. Guice, not Fournette, led the SEC in rushing, touchdowns and all-purpose yards last year. Guice has averaged a ridiculous 8.3 yards per carry as the featured back. He’s running about 10th in the Heisman Trophy odds, between 15-1 and 20-1. He’ll operate behind a strong line with two preseason all-SEC choices — C Will Clapp and LT K.J. Malone.

Rankings vs. reality: College Football News named LSU one of the nation’s five most overrated teams, with USC, Penn State, North Carolina and Wyoming. It isn’t for lack of talent. The Tigers landed seven players on preseason all-SEC teams and their last four recruiting classes were ranked 7, 2, 5 and 2 by 247Sports’ composite ratings. They haven’t been out of the top 10 since 2008. The 2018 class is currently No. 5. Some ‘17 freshmen who might contribute early: Safeties JaCoby Stevens and Grant Delpit, OG Austin Deculus and OLB K’Lavon Chaisson of Galena Park North Shore, who chose LSU over Texas on signing day.

No. 11: Coming Wednesday. Want a hint? Part of this school’s fight song has the line “fly down the field ever to conquer, never to yield.”