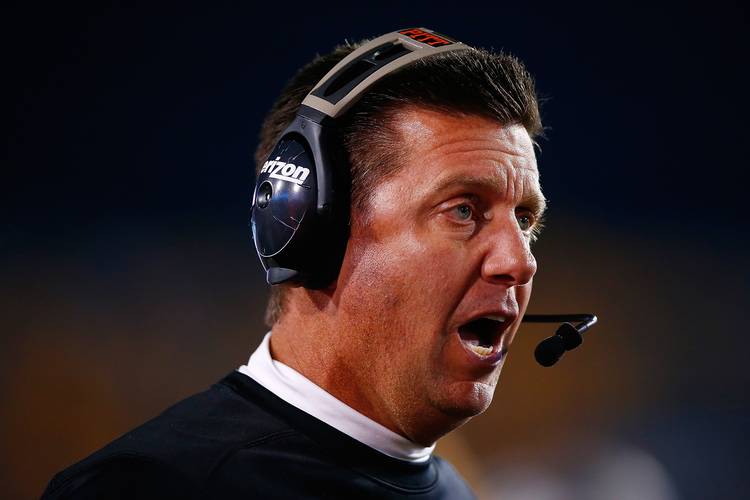 Oklahoma State coach Mike Gundy looks on in the second half against the West Virginia Mountaineers during the game at Mountaineer Field on October 10, 2015 in Morgantown, West Virginia. (Photo by Jared Wickerham/Getty Images)

Oklahoma State coach Mike Gundy blasted the Longhorn Network as a “failure” and stressed the Big 12 is doomed if Texas officials do not acquiesce and move toward a league-wide network, like the SEC or Big Ten.

In an interview with CBS Sports, Gundy said the Big 12 faces a perception problem because, “Right now, the Big 12 is not getting the marketing we need because of the Longhorn Network.”

On Tuesday, Texas officials were aware of the CBS Sports story but typically do not comment about LHN’s contractual situation.

“If we don’t eliminate the Longhorn Network and create our own network, they’re going to continue to have issues with this league,” Gundy said, according to CBS Sports. “You don’t have a Big 12 Network; you have a network within the league that people consider a failure.”

Various reports have stated the Longhorn Network has lost millions in recent years. However, a detailed story in the San Antonio Express-News said that LHN was on track to turn its first profit in 2016.

“If Texas doesn’t (fold LHN) in X number of years, they’re going to be in the Pac-12 or SEC,” Gundy said. “If that’s what they want, keep riding this horse. If you don’t want that, you better make some changes or it’s going to happen whether you like it or not.”

Here’s a copy of the full Longhorn Network contract, obtained through an open records request.