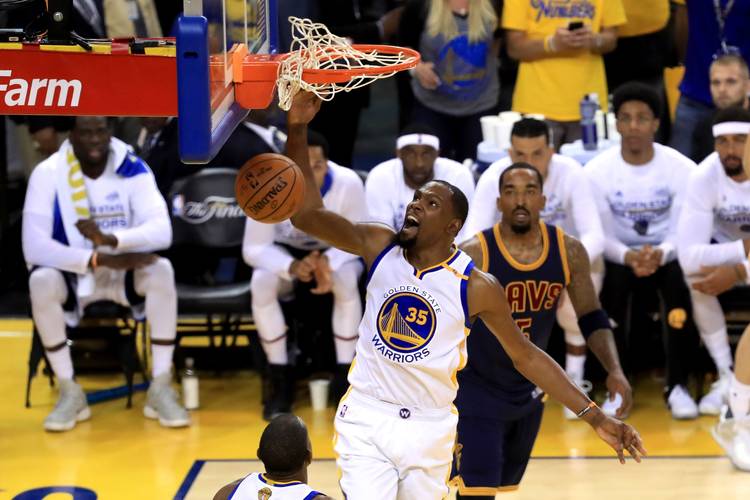 Kevin Durant #35 of the Golden State Warriors dunks the ball against the Cleveland Cavaliers in Game 1 of the 2017 NBA Finals at ORACLE Arena on June 1, 2017 in Oakland, California. (Photo by Ronald Martinez/Getty Images)

Eight of the nine former Longhorns that play in the NBA qualified for the NBA playoffs. We’ve been following their progress throughout the postseason. Now just two players remain on opposing sides of the court in the NBA Finals. Here’s a look at how they’ve performed thus far.

Kevin Durant, SF, Golden State—Durant and the Warriors have a real shot at going through the playoffs undefeated if they continue to play the way they did in Game 1 of the NBA Finals. Durant had 38 points, eight assists and eight rebounds. What’s scary is the Warriors only shot 43 percent from the field and still managed a 113-91 win over the Cleveland Cavaliers. Things came easy down the lane for the Warriors, as Durant converted six dunks in the first half. He had 23 points by halftime. Here’s a look at his best plays from Thursday night.

The best of Kevin Durant's Game 1, through the lens of our slo-mo #PhantomCam! #NBAFinals #DubNation pic.twitter.com/EHYfyyeV6e

Durant even became just the second player in NBA history to record 38 points, eight assists and eight rebounds in the first game of the NBA Finals.

KD was special in Game 1.

As one Reddit user commented, Durant banished LeBron James into the shadow realm on this play.

Tristan Thompson, C, Cleveland—As much as Durant was a factor in Thursday’s game, Thompson was a non-factor. He played just 22 minutes and went scoreless with four rebounds. Thompson went 0-for-3 from the floor and it’s not clear whether he’ll have a chance to contribute against the fast-paced Warriors. One thing is for sure, he and the Cavs will have to limit the easy shots the Warriors are converting in the paint. They’ll get a second opportunity on Sunday.