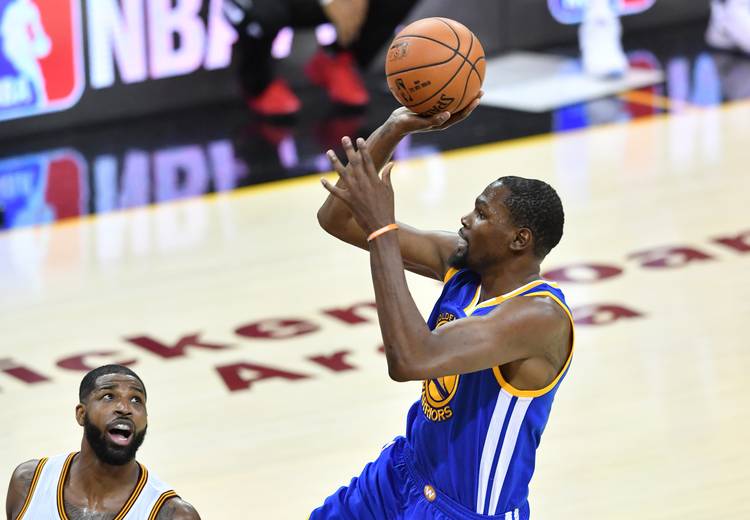 Kevin Durant #35 of the Golden State Warriors attempts a jump shot against the Cleveland Cavaliers in Game 4 of the 2017 NBA Finals at Quicken Loans Arena on June 9, 2017 in Cleveland, Ohio. (Photo by Jason Miller/Getty Images)

Eight of the nine former Longhorns that play in the NBA qualified for the NBA playoffs. We’ve been following their progress throughout the postseason. Now just two players remain on opposing sides of the court in the NBA Finals. Here’s a look at how they’ve performed thus far.

Kevin Durant, SF, Golden State—The Warriors started the night just a win away from taking their second NBA Championship in three years, but a strong start by the Cavaliers made it look like Durant and Golden State would have to wait. The Cavs hit an NBA Finals record 24 3-pointers on the way to a 137-116 win over Durant and the Warriors.

Despite the loss, Durant scored 35 points to lead Golden State.

The former Longhorn has been the best player for the Warriors during the NBA Finals, making a strong case to take home the Finals MVP award should the Warriors eventually close out the series.

He piled up many accolades that night.

Kevin Durant is the third player in NBA history to score at least 25 points in each of his first 7 NBA Finals… https://t.co/wvWClVmMqt

In Game 3 Durant scored 31 to go with nine rebounds and four assists. The Cavs gave the Warriors their best shot, but Golden State still won 118-113.

Durant’s pull-up 3 with less than a minute to go put the Warriors on top for good.

Durant started slow in Game 4, not scoring until 4:57 left in the first quarter. He hit this 3-pointer over another former Longhorn.

Tristan Thompson, C, Cleveland—Thompson has had a tough time contributing in the series. He had eight points and four rebounds in Game 2, but was scoreless in Game 3. He had two blocks and two assists in 23 minutes of the close loss. Thompson was most productive in Game 4, scoring five points to go along with a team-leading 10 rebounds and five assists. Thompson played 36 minutes, the most he’s played in a game during the series so far. His previous game-high had been in Game 3. Overall he put in a solid performance despite getting dunked on by his own teammate. The Cavaliers have their work cut out for them, but last year no team had ever come back from down 3-1 and they ended up winning the title. They’ll have to make history if they want to win the title this year.