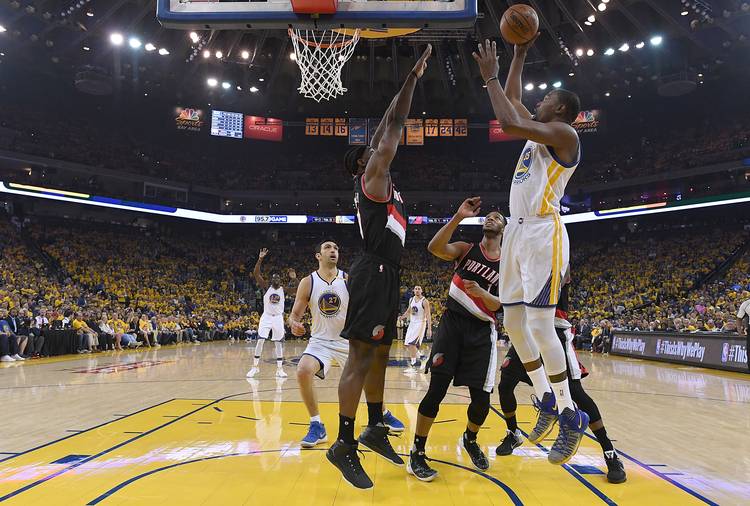 Kevin Durant #35 of the Golden State Warriors goes up for a layup over Noah Vonleh #21 of the Portland Trail Blazers in the first quarter during Game One of the first round of the 2017 NBA Playoffs at ORACLE Arena on April 16, 2017 in Oakland, California. (Photo by Thearon W. Henderson/Getty Images)

Eight of the nine former Longhorns that play in the NBA are in the NBA playoffs. We’ll follow their progress throughout the postseason. Here’s a look at how they’ve performed thus far.

Kevin Durant, SF, Golden State—Durant had just three games of regular season action to get ready for the NBA playoffs after missing 19 straight games with a knee injury. He looked pretty good in his playoff debut with the Warriors on Sunday as they defeated the Trail Blazers 121-109. He finished the game with 32 points and 11 rebounds in 36 minutes. The win wasn’t without a cost, however, as Durant injured his calf. It’s not serious, but he was held out of Game 2’s win on Wednesday and is questionable for Saturday’s Game 3.

LaMarcus Aldridge, PF, San Antonio—Aldridge stepped up his game for the opening of the playoffs as the Spurs defeated Memphis 111-82 on Saturday. He scored 20 points on 8 of 18 shooting and brought down six rebounds. It was the first time he scored at least 20 points since March 23 against the same Grizzlies. He followed that up with an 11-point, 4-rebound performance in Monday’s 96-82 win. He also had two blocks in the game. The Spurs lost Game 3, 105-94, despite Aldridge’s double-double. He had 16 points and 11 boards in the effort.

Myles Turner, C, Indiana—The Pacers are in a tough spot, down 3-0 to the defending NBA champs and Turner is having a difficult time getting comfortable. He’s only scored in double digits in Game 1’s 109-108 loss to the Cavs. Turner followed that up with back-to-back 6-point, 5-rebound performances. He does have five blocks in the series. The highlight of Turner’s playoffs came on a spectacular dunk over fellow ex-Horn Tristan Thompson in Game 3. Thompson got the last laugh, however, as the Cavs erased a 25-point halftime deficit in the contest to take the win.

"MYLES TURNER FROM THE RAFTERS!" 😳🔨 pic.twitter.com/yyGSUNrvQV

Tristan Thompson, C, Cleveland—Speaking of Thompson, he’s been filling his role nicely as the Cavs have a commanding lead over Indiana. He opened the series scoring eight points on 4 of 5 shooting to go with 13 rebounds. Thompson’s had double-digit rebounds in each of the first three games of the series. He had just four points, but blocked two shots in Game 2’s 117-111 win. In Game 3 Thompson scored nine points while grabbing 10 boards and blocking three shots.

Avery Bradley, PG, Boston—Tragedy struck the Celtics as star player Isaiah Thomas lost his sister to a car accident just before the first round series with the Bulls began. With the support of his teammates, including Bradley, Thomas has played in all three games. The Celtics trail 2-1 after picking up a 104-87 road win on Friday. Bradley filled up the stat sheet as he scored 15 points to go with seven rebounds and seven assists. He also had two steals and made 4 of 6 3-pointers. Bradley had 14 points in Game 1 and 12 in Game 2.

Cory Joseph, G, Toronto—The Raptors trail the Bucks 2-1 in their playoff series, but if they win Saturday’s contest they’ll take back home-court advantage. In both losses, Joseph was just 1 for 5 from the field. He ended Game 1 with three points and five assists and had just two points in Thursday’s loss. In Game 2’s win Joseph had 11 points on 4 of 6 shooting, including 3 of 4 from 3-point range.

P.J. Tucker, SF, Toronto—Alongside Joseph is Tucker, who is playing for the first time in the NBA playoffs. He had seven points and four rebounds in his playoff debut, the 97-83 loss to Milwaukee. Tucker had five points and five rebounds in the 106-100 win in Game 2. He was held scoreless and played in significantly fewer minutes in Game 3. Tucker’s averaging 23.7 minutes per game in the series but only played in 14 of Game 3’s loss.