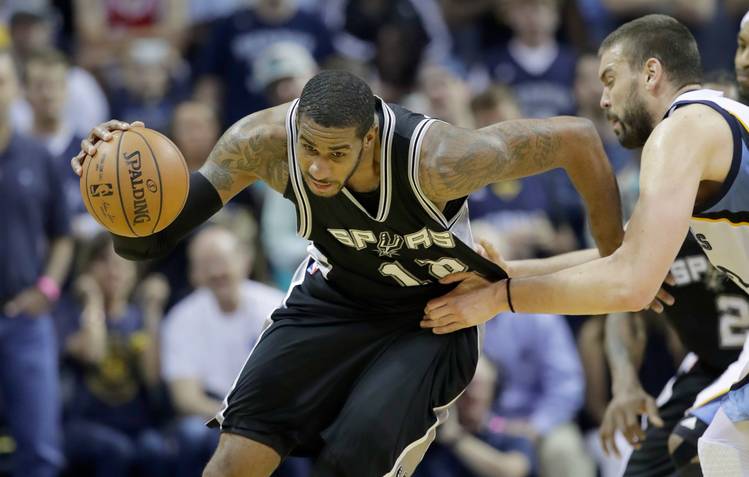 LaMarcus Aldridge #12 of the San Antonio Spurs grabs a loose ball against the Memphis Grizzlies in game four of the Western Conference Quarterfinals during the 2017 NBA Playoffs at FedExForum on April 22, 2017 in Memphis, Tennessee. (Photo by Andy Lyons/Getty Images)

Eight of the nine former Longhorns that play in the NBA qualified for the NBA playoffs. We’ll follow their progress throughout the postseason. Here’s a look at how they’ve performed thus far.

Kevin Durant, SF, Golden State—Durant opened the playoffs with a strong start, but missed Games 2 and 3 against the Trail Blazers with a strained left calf. He returned to action in Monday’s closeout win over Portland. He had just 10 points and three rebounds to go with two blocks in 20 minutes. The game was pretty much over by halftime so Durant was able to sit. He and the Warriors await the winners of the Utah-Los Angeles Clippers series.

LaMarcus Aldridge, PF, San Antonio—Aldridge put up a gritty effort in the Spurs’ Game 6 win over the Grizzlies to take the series. He had 17 points and 12 rebounds in 42 minutes of action. He was a rebound shy of a double-double in Game 5’s win on Tuesday. He had 12 points on 39 percent shooting in the win. In Saturday’s loss that made the series 2-2, Aldridge had 13 points and just two rebounds. His breakaway dunk helped the Spurs keep pace with the Grizzlies. He had a tough series, having to go up against Marc Gasol and Zach Randolph. But he did enough to help the Spurs advance. San Antonio will face Houston in the conference semis beginning at 8:30 p.m. in San Antonio on Monday.

Tristan Thompson, C, Cleveland—The Cavs completed the sweep of the Pacers on Sunday, winning 106-102. Thompson had six points and 11 rebounds in the victory. He added an assist and a steal. He’s had double-digit rebounds in each playoff game so far and that’s what the Cavs will continue to ask of him. Thompson and Cleveland will now face the Toronto Raptors beginning Monday at 6 p.m. in Cleveland. Thompson will face two other former Longhorns in Cory Joseph and P.J. Tucker.

Myles Turner, C, Indiana—Turner had the best game of his playoff career in Game 4’s loss against the Cavs. He had 20 points on 8 of 10 shooting and nine rebounds in 33 minutes. Turner’s previous playoff-high was 17 points in Game 3 of last season’s first round against the Raptors. Despite bowing out of the playoffs, Turner may have the dunk of the playoffs so far.

Avery Bradley, PG, Boston—Bradley and the Celtics looked to be in a lot of trouble, down 2-0 after two games at home. They went on to win four in a row to close out the series with the Bulls. Bradley was a big part of that result as he took it personally when the Bulls were surprised at his good performances.

Avery Bradley says he "took it personal" against Jimmy Butler in Game 6.

"I won two battles in a row." pic.twitter.com/Wgf7aybqWc

Boston will now take on Washington in the conference semifinals.

Cory Joseph, G, Toronto—The Raptors were down 2-1 but were able to win three straight to advance to the conference semis where they’ll face Cleveland. Joseph played just eight minutes in Game 4’s win, but had a nice game Monday. He scored 10 points and added three rebounds to help Toronto take a 3-1 lead. He had just five points in Thursday’s closeout win, but he hit a big 3-pointer late to help seal the win. Toronto blew a 25-point lead, but Joseph’s shot put the Raptors up for good.

With the score tied late, @Cory_Joe stepped up & cashed a 3 for the @LGCanada Game Changing Play. #WeTheNorth pic.twitter.com/UW41HT3aoD

P.J. Tucker, SF, Toronto—Tucker has been quiet offensively, but he’s been adding rebounding and toughness to the Raptors. He had four points, seven rebounds and a block in Thursday’s series-ending win. He had two points, two assists and six boards in Game 5’s win. He’s playing about 24 minutes a game in the playoffs.

Isaiah Taylor, PG, Houston—As expected, Taylor hasn’t logged any minutes in the playoffs yet. He played just 52 minutes in the regular season after joining the Rockets in late February. If he enters the series with the Spurs, it will likely be in a blowout either way.