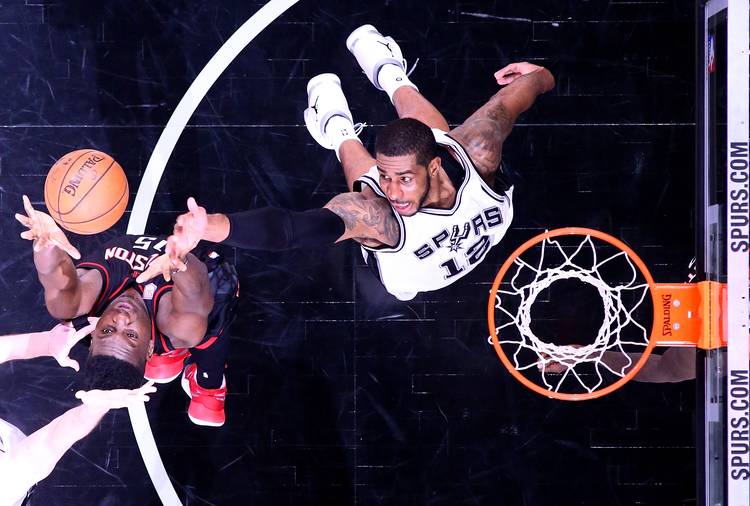 LaMarcus Aldridge #12 of the San Antonio Spurs jumps for a rebound against Clint Capela #15 of the Houston Rockets during Game Two of the NBA Western Conference Semi-Finals at AT&T Center on May 3, 2017 in San Antonio, Texas. (Photo by Ronald Martinez/Getty Images)

Eight of the nine former Longhorns that play in the NBA qualified for the NBA playoffs. We’ll follow their progress throughout the postseason. Seven remain after the first round. Here’s a look at how they’ve performed thus far.

Kevin Durant, SF, Golden State—Durant and the Warriors got their second round of the play started with a 106-94 win over Utah on Tuesday. Durant scored 17 to go with five rebounds and five assists. He was much more impressive in Game 2 on Thursday, dropping 25 to go with 11 boards and seven assists. The Warriors have yet to lose a game in the playoffs after sweeping the Trail Blazers in the first round. Here’s a nasty dunk from the Warriors Game 2 win.

LaMarcus Aldridge, PF, San Antonio—Aldridge had his best game of the playoffs Friday when his team needed it the most, scoring 26 points and making four blocks to lift the Spurs over the Rockets 103-92 to take a 2-1 series lead. Aldridge had a rough start to the second round as he scored just four points in Game 1 and his Spurs fell 126-99. He managed 15 points and a nine rebounds in Game 2 to help the Spurs tie the series.

Avery Bradley, PG, Boston—Bradley and the Celtics hold a 2-1 lead over the Washington Wizards after falling 116-89 on Thursday. He  had his worst game of the series so far, scoring just seven points. Bradley played great in the first two games at home, combining for seven steals in the process. He scored 18 points in Game 1, followed by 14 in Game 2. He’s not shooting well, but his defense and rebounding from the guard position is proving valuable.

Here’s some of his best work from Game 1.

Cory Joseph, G, Toronto—The Raptors are likely on their way out of the playoffs as they trail 3-0 to the defending champion Cleveland Cavaliers. Toronto has lost big in all three games. Joseph’s biggest contribution came in Game 2 on Wednesday when he scored 22 points and collected six rebounds. He’s scored just six points in the other two games combined.

P.J. Tucker, SF, Toronto—Tucker started the series against the Cavs strong with a double-double. He scored 13 points and grabbed 11 rebounds in Game 1’s 116-105 loss. In the next two blowout losses he’s combined for just five points and eight rebounds.

Isaiah Taylor, PG, Houston—Taylor finally made his playoff debut for the Rockets, running around for four minutes in Wednesday’s blowout loss to San Antonio. He had an assist in the game but didn’t take a shot. He was in street clothes during Game 3’s loss.