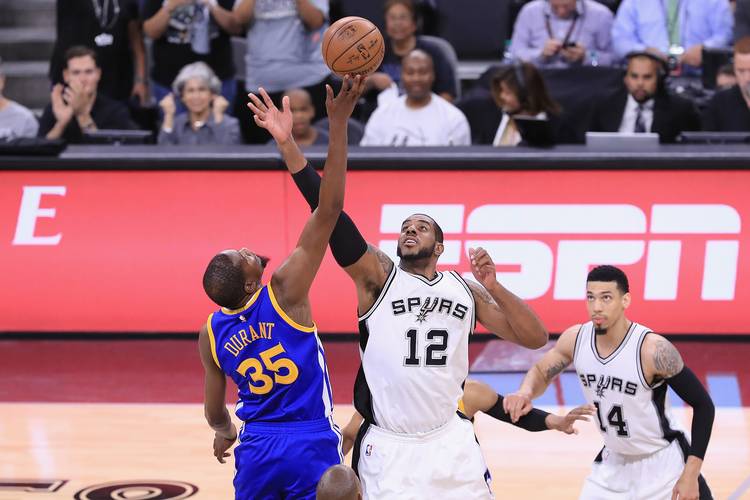 Kevin Durant #35 of the Golden State Warriors and LaMarcus Aldridge #12 of the San Antonio Spurs battle for the opening tipoff during Game Four of the 2017 NBA Western Conference Finals at AT&T Center on May 22, 2017 in San Antonio, Texas. (Photo by Ronald Martinez/Getty Images)

Eight of the nine former Longhorns that play in the NBA qualified for the NBA playoffs. We’ll follow their progress throughout the postseason. Four advanced to the conference finals and now just two remain. Here’s a look at how they’ve performed thus far.

Kevin Durant, SF, Golden State—Durant and the Warriors still haven’t lost a game in the playoffs, sweeping the shorthanded San Antonio Spurs in the conference finals. Durant scored 33 points in Game 3 to go with 10 rebounds. He followed that up with 29 points, 12 boards, four assists and a block in Monday’s closeout game. He’s averaging 25.2 points per game in the playoffs and is shooting 56 percent from the field. He’ll take on another former Longhorn in the NBA Finals as he faces Tristan Thompson.

Tristan Thompson, C, Cleveland—Thompson and the Cavs finally lost a game in the playoffs but still managed to close out the Boston Celtics to reach the NBA Finals for the third straight time. Thompson was a bright spot in the loss on Sunday, scoring 18 points to go with 13 rebounds and a block. It was just his second double-double of the playoffs. The Cavs took two straight wins after that, with Thompson totaling just 13 points and 12 boards in the wins. He and the Cavs will have their hands full as they face Durant and the Warriors’ high-powered offense.

LaMarcus Aldridge, PF, San Antonio—With Kawhi Leonard out of commission, Aldridge needed to step up for the Spurs. He didn’t fare so well. Aldridge had 18 points and two blocks in the 120-108 loss in Game 3. He had just eight points and seven rebounds in Game 4 on Monday. After having a solid series against the Houston Rockets, in which he averaged 18.8 points per game, Aldridge just mustered 15.5 points per contest against the Warriors.

Avery Bradley, PG, Boston—Bradley and the Celtics went down fighting, even managing to take a win in the 4-1 series loss to the Cavs. Bradley had 20 points and two steals in the 111-108 win in Game 3 at Cleveland. The Cavs righted the ship, however, in Game 4 as they topped the Celtics 112-99. Bradley had 19 points and five rebounds in that game. He ended the series with a 23-point, four-rebound performance in Game 5. Bradley averaged 19.2 points in the conference finals, nearly three points better than his playoff average.

Yuya Ito falls in round of 16 at NCAA Championships