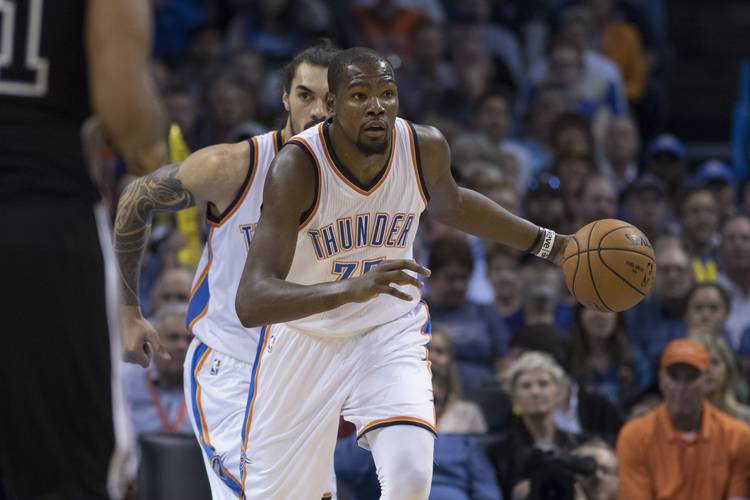 Kevin Durant, F, Oklahoma City Thunder: Entering his 9th NBA season, the perennial MVP candidate is averaging 29.2 points per game. The Thunder have dropped two straight since starting the season 3-0, including a season opening win over the Spurs. He scored 43 points and grabbed 12 rebounds in the Thunder’s 139-136 double overtime win over the Magic last Friday. He also blocked the last two 3-point attempts by Orlando to seal the win.

LaMarcus Aldridge, F, San Antonio Spurs: He’s in his 10th season in the NBA and moved from an up and coming team in the Portland Trailblazers to a proven championship organization in the San Antonio Spurs in the offseason as a free agent. He’s still feeling his way into the mix as he’s averaging 14.8 points per game and 10 rebounds through the first week of the season. He led the Spurs in scoring for the first time in Sunday’s win over the Celtics when he scored 24 points in addition to grabbing 14 rebounds.

D.J. Augustin, G, Oklahoma City Thunder: The 27-year old is in his 8th season, with his sixth different team, in the NBA. He’s trying to find a roll with the Thunder and is doing okay, scoring 9.2 points per game to go along with three assists. If the NBA refs let him get away with this all season, he may be all right.

Avery Bradley, G, Boston Celtics: Bradley is starting his 6th season with the Celtics. Unfortunately, every time he plays well this season his team loses. He scored just four points in the season opening win, but the Celtics have dropped three straight with him scoring 13, 18 and 21 in those games.

Cory Joseph, G, Toronto Raptors: The 24-year old is in his fifth season, his first with the 5-0 Raptors, and he’s averaging 5.8 points per game to go along with 2.8 assists and 1.4 steals. He had his best game this season in the Raptors’ 103-98 win over the Thunder on Wednesday. He scored 9 points, had 4 rebounds, 3 assists and 3 steals in the win.

Tristan Thompson, F, Cleveland Cavaliers: Thompson is averaging 7.6 points per game and hauling in 10 rebounds per game in his 5th season. He had a double-double (10 points, 13 rebounds) in Wednesday’s win over the Knicks and he’s averaging a block per game.

Myles Turner, F, Indiana Pacers: At just 19 years old, Turner is adjusting quickly to the NBA game, averaging 7.8 points, 4 rebounds and 1.5 blocks per game. He’s also shooting .542 so far this season. The first basket of his career came on a put back dunk in his debut last Thursday.

P.J. Tucker, F, Phoenix Suns: The 30-year old is averaging just over 22 minutes per game in his fourth year with the Suns. He scored 10 points, including 3 of 4 from behind the arc, in Wednesday’s win over the Kings.

My All American screened in Austin