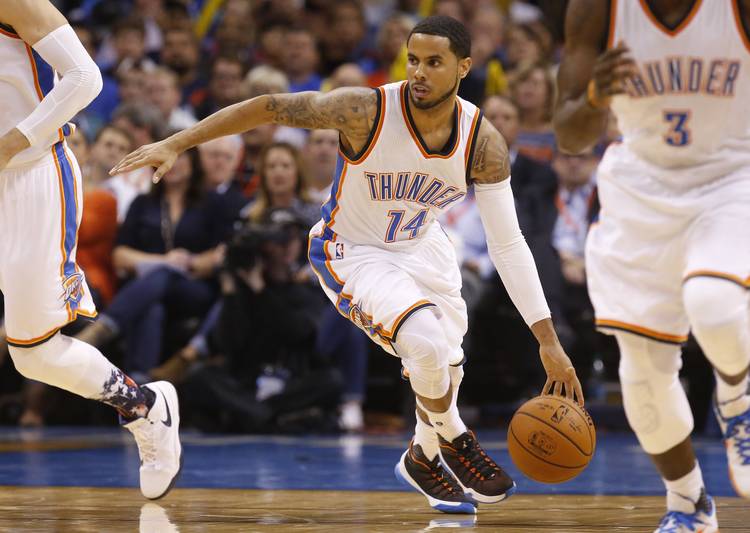 D.J. Augustin is averaging 6.8 points per game to go along with three assists. (AP Photo/Sue Ogrocki)

LaMarcus Aldridge, F, San Antonio Spurs: Aldridge returned to Portland on Wednesday to play against the team with which he started the first nine years of his career. He led the Spurs with 23 points and heard what he estimated was 70-30, cheers to boos. He shot 50%, pulled down six rebounds and blocked a shot. He’s averaging 16.1 points per game and hauling in an average of 8.8 rebounds so far this season. The Spurs have won three in a row since last week. Here are his thoughts after the win over the Blazers.

Kevin Durant, F, Oklahoma City Thunder: Durant has scored 79 points in his last three games, but he’s expected to miss seven to 10 games due to a hamstring injury he suffered in the second quarter of the Washington game on Tuesday. He was on his way to scoring in the 30s again as he registered a double-double, 14 points and 10 rebounds. On the season, he’s averaging 28.1 points per game and 7.3 rebounds.

D.J. Augustin, G, Oklahoma City Thunder: He’s scored just eight points in his last three games, but has acted as a decent facilitator, dishing out nine assists in that time. He’s averaging 6.8 points per game and that’s down from his career average of 10, but it’s tough to score with Durant and Russell Westbrook on your team.

Tristan Thompson, F, Cleveland Cavaliers: He’s averaging 8.1 points and 9.6 rebounds per game. He also blocks at least one shot per game. He scored 16 points, one 7-for-8 shooting, and hauled in eight rebounds in Sunday’s win over the Pacers. He’s a big part of the Cavs’ seven-game winning streak.

Avery Bradley, G, Boston Celtics: Bradley suffered a bruised leg in Tuesday’s game against Milwaukee. Last week he totaled just eight points, but his Celtics picked up two wins. His status is listed as day-to-day. On the season he’s averaging 10.7 points and 3 rebounds per game.

Myles Turner, F, Indiana Pacers: He matched his career highs in points and rebounds on Monday, scoring ten points and grabbing four rebounds, but he fractured his thumb on Wednesday and will be out at least four weeks. Turner played 20 minutes in the Pacers’ 97-84 win over the Magic on Monday. He only played one minute in Wednesday’s game against the Celtics as he fractured his thumb on a steal attempt.

Cory Joseph, G, Toronto Raptors: Since we last checked in, he’s scored 19-4-12-15 in four games. He played a season-high 31 minutes in a win over the 76ers on Wednesday night. He’s also totaled 13 assists in his last two games combined. His 8.8 points per game is three points better than his career average.

P.J. Tucker, F, Phoenix Suns: Tucker had a season-high in rebounds on Friday as he hauled in ten of them  while scoring five points in the loss to the Pistons. He played 34 minutes in the game. He only went 1-for-5 in Sunday’s loss to the Thunder.