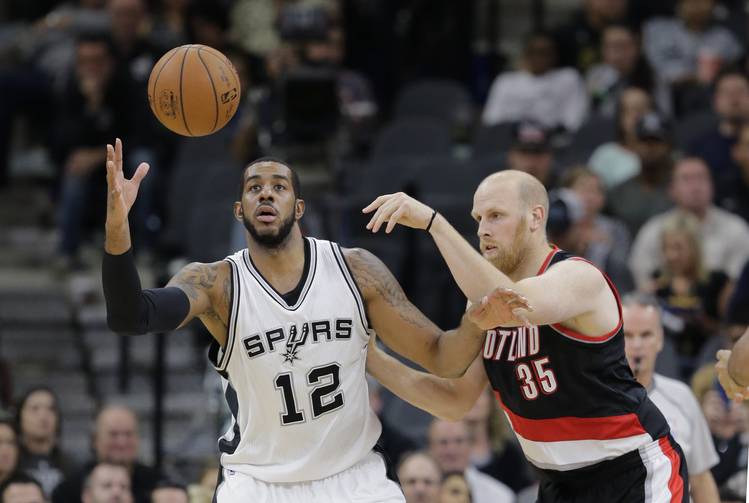 LaMarcus Aldridge, F, San Antonio Spurs: The Spurs are in the midst of a six-game winning streak and Aldridge has logged two double-doubles in that stretch. On Wednesday he scored 11 points and pulled down 12 rebounds in the 109-98 win over the Nuggets. He also had two blocks in the game. Saturday he scored 17 and grabbed 19 rebounds in the 92-83 win over the 76ers. Aldridge also helped defeat his former team, the Trailblazers, for the second time in five days on Monday. He’s also averaging 9.8 rebounds per game, more than a rebound over his career average.

Cory Joseph, G, Toronto Raptors: The Raptors have lost three in a row, but Joseph has been doing his part, scoring 38 points in that stretch. He nearly pushed the Raptors to an upset win over the Golden State Warriors on Tuesday, but he was called for a foul on his game-tying put back basket. He’s putting up career-best numbers in points (9.7), assists (3.1) and rebounds (2.8).

Kevin Durant, F, Oklahoma City Thunder: He’s been out with a hamstring injury since Nov. 11, but it looks like he could return by Sunday. He’ll be a free agent at the end of the season and there has been speculation that he could end up with the Golden State Warriors next season. It could happen.

D.J. Augustin, G, Oklahoma City Thunder: Durant’s teammate scored nine points on 3-for-3 shooting in the Thunder’s 110-103 win over the New Orleans Pelicans. He also had three assists in the win and went 2-for-2 from behind the arc. He’s averaging 6.5 points per game.

Myles Turner, F, Indiana Pacers: He fractured his thumb on Nov. 11 and is expected to be out at least three more weeks.

P.J. Tucker, F, Phoenix Suns: He scored 20 points and collected seven rebounds in Wednesday’s 103-97 loss to the Bulls. Before that the Suns won three in a row, including a 120-101 win over the Lakers in which Tucker scored 11 points and grabbed seven boards. He’s scoring 6.9 points per game and averaging 4.9 rebounds.