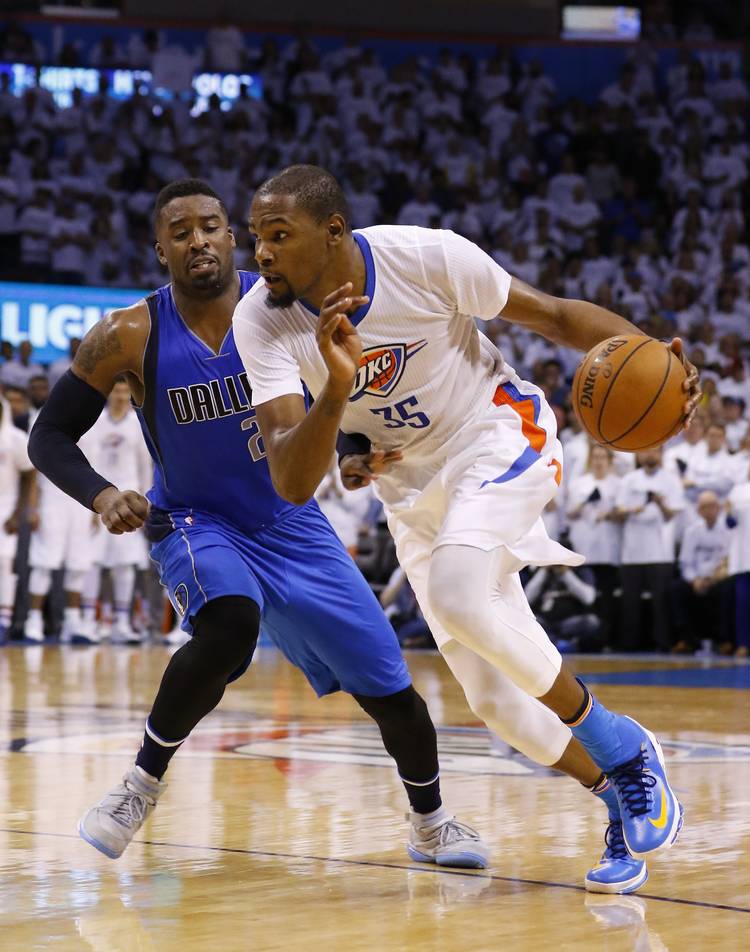 Six out of eight Longhorns in the NBA are competing in the playoffs, trying to advance to the second round. Here’s how they did in the first week of postseason action.

Kevin Durant, F, Oklahoma City Thunder: Surprisingly, the Thunder found themselves in a tough series entering Thursday. They were tied 1-1 with the Dallas Mavericks after falling 85-84 on Monday. Saturday’s 38-point win in Game 1 didn’t carry over to the second game. Durant scored 23 in the first game to go along with 5 rebounds and 5 assists. He still managed to score 21 in Game 2 despite a horrific shooting night. He went 7 for 33 from the field for 21 percent shooting on Monday. The Thunder would do well to get by the Mavs as quickly as possible, to prepare for a likely matchup with the second-seeded San Antonio Spurs.

LaMarcus Aldridge, F, San Antonio Spurs: Speaking of the Spurs, Aldridge and his San Antonio teammates have had an easy time with the depleted Memphis Grizzlies in the first two games of their series. Aldridge was only needed for 27 minutes in each of the first two games as he scored 17 points in Game 1 and 10 points in Game 2. He also contributed eight rebounds and four blocks in the second game. The Spurs followed up their 106-74 win in Game 1 with another blowout in the form of a 94-68 win in Game 2.

Myles Turner, F, Indiana Pacers: Turner and the Pacers surprised the second-seeded Toronto Raptors in Game 1 as they defeated them 100-90 on Saturday. Turner scored 10 points as he made 5 rebounds to go along with 5 blocks in 26 minutes. The rookie played less minutes in Game 2, which the Pacers lost 98-87, and managed 8 points on 4 of 5 shooting and 2 blocks.

Cory Joseph, G, Toronto Raptors: Playing on the other side of the Pacers-Raptors series is Joseph, who’s averaging 17 points per game so far. He had 18 in the Game 1 loss and then chipped in 16 in Game 2’s win. He played 24 minutes and had 3 assists in each of the first two games.

Avery Bradley, G, Boston Celtics: He injured his right hamstring in Game 1 of the series against the Atlanta Hawks. He had already played 33 minutes and scored 18 points before pulling up with the injury. The Celtics lost the game by a single point. Game 2 wasn’t much of a contest as the Hawks came out on top 89-72 as Bradley sat out the game. He won’t have a chance to return unless the Celtics advance to the second round. Bradley, who finished sixth in the Defensive Player of the Year voting, has been ruled out for the rest of this series.

Tristan Thompson, F, Cleveland Cavaliers: The success of the Cavs in the first two games of their series with the Detroit Pistons hasn’t been due in large part to Thompson. Though he played 30 minutes in Game 1’s 106-101 win he scored just 2 points to go along with 6 rebounds. He played just 13 minutes in the 107-90 blowout win on Wednesday and was held scoreless. He had just one rebound in the game. The good news is that he finished in the top-10 of Sixth Man of the Year voting.