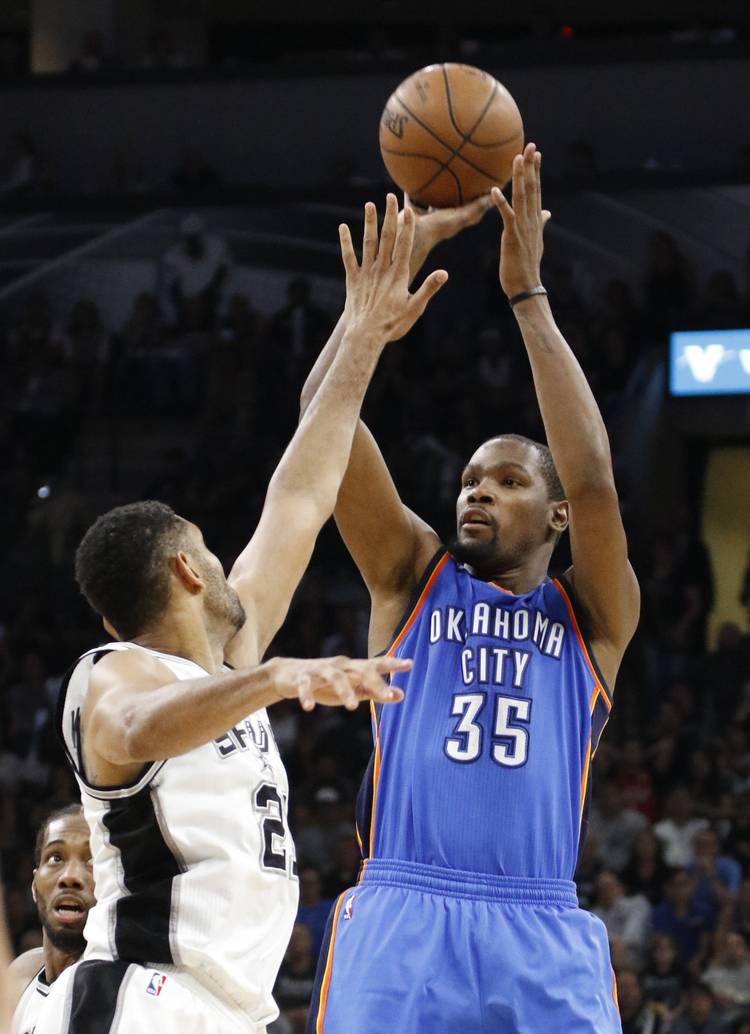 Kevin Durant #35 of the Oklahoma City Thunder takes a shot against the San Antonio Spurs in game Five of the Western Conference Semifinals during the 2016 NBA Playoffs at AT&T Center on May 10, 2016 in San Antonio, Texas. (Photo by Ronald Cortes/Getty Images)

There are now three Longhorns in the NBA playoffs left, trying to make their run to the championship. Here’s how they did, along with another Longhorn who was knocked out of the second round of playoff action.

Kevin Durant, F, Oklahoma City Thunder: After falling to the Spurs one last time on May 6th, Durant found his shooting stroke and led the Thunder to three straight wins to take the Spurs out of the playoffs on Thursday night. He had 26 points in the 100-96 loss, but bounced back with 41 points in the 111-97 win in Game 4. He scored 23 in the 95-91 win on the road and closed the series out with a 37-point, 9-rebound performance. We’ll see if he and the Thunder can stay hot against the Golden State Warriors in the Western Conference Finals.

LaMarcus Aldridge, F, San Antonio Spurs: In the Spurs’ final win of the year, Aldridge scored 24 points and pulled down 8 rebounds. After shooting 41 for 63 in the first three games, for 63 percent, he went 23 of 57 for 40 percent through the final three contests. He scored 20 points in Games 4 and 5 and recorded a double-double (18 points, 14 rebounds) in Game 6. He averaged 26.8 points per game in the series, but struggled to find his stroke late in the final three games.

Cory Joseph, G, Toronto Raptors: Joseph and the Raptors were unable to close out the Miami Heat on Friday night as they fell 103-91, forcing a Game 7 in Toronto. Joseph had seven points and three rebounds in the loss. In the 99-91 Game 5 win he scored nine points and dished out five assists. He also made two steals. His best scoring output came in Monday’s Game 4 loss as he scored 14 points. He’s averaging 8.7 points and 2.7 assists per game as a backup point guard.

Tristan Thompson, F, Cleveland Cavaliers: Thompson has seen just eight games of action as the Cavs are steamrolling the competition in the Eastern Conference playoffs. He scored five points and grabbed ten rebounds in the closeout win over the Hawks on Sunday. He also made two blocks in the game. He had seven points and 13 boards in Friday’s 121-108 win. He and the Cavs await the winner of the Miami/Toronto series. Should Toronto win it would set up a series between Longhorns in the NBA who were teammates in the 2010-2011 season. Interestingly enough, both Thompson and Joseph hail from Canada.