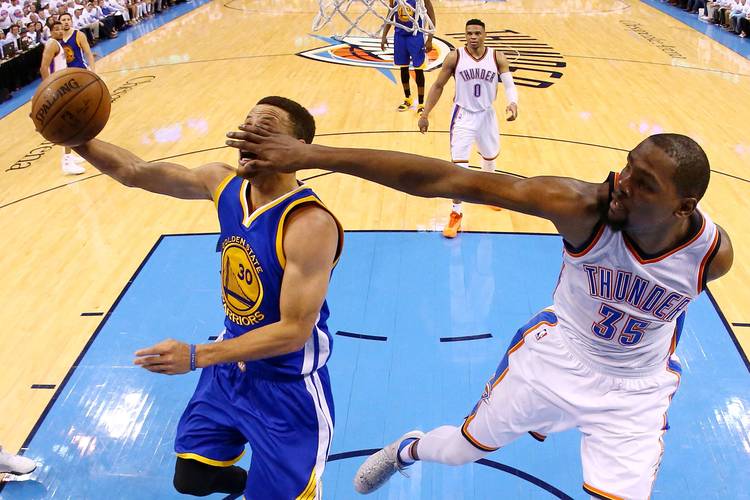 Stephen Curry #30 of the Golden State Warriors goes up against Kevin Durant #35 of the Oklahoma City Thunder in the second half in game four of the Western Conference Finals during the 2016 NBA Playoffs at Chesapeake Energy Arena on May 24, 2016, in Oklahoma City, Oklahoma. (Photo by Ronald Martinez/Getty Images)

Kevin Durant, F, Oklahoma City Thunder: Durant and the Thunder have put on quite a show as they close in on an upset for the ages. Not that the Thunder weren’t considered a threat, but to take a 3-1 lead, entering Thursday, on the defending champion Warriors who just completed the best regular season in history is astounding. Durant did his part to close out the Warriors in Game 5 on the road, but Golden State won 120-111 to earn the right to play another day. Durant scored 40 points to go with seven rebounds and four assists. He also had a block and a steal in a great all around effort. His 40 points made him the first person to score at least 40 points in multiple playoff games this season. Durant scored 33 points in the Thunder’s 133-105 win in Game 3 to take a 2-1 series lead. He followed that up with 26 points and 11 rebounds in the 118-94 victory to put the Thunder in a very good position to take the series. Even with Thursday’s loss, Oklahoma City has two opportunities to close out the Warriors. Their best chance will be in Game 6 at home on Saturday.

Tristan Thompson, F, Cleveland Cavaliers: Thompson’s Cavs finally lost a game in the playoffs. In fact, the Raptors were able to take two games in a row as they held court at home. Thompson wasn’t much of an offensive factor in either of those games, but he did help in rebounding and defense. He had eight rebounds and two blocks in Game 3 and nine boards in Game 4. As the Cavs bounced back in a big way in Game 5, winning 116-78, so did Thompson who scored nine points and pulled down ten rebounds. He also had a steal and a block in the game. He and the Cavs will have two chances to close out the Raptors, first in Toronto on Friday and then at home on Sunday, if necessary.

Cory Joseph, G, Toronto Raptors: Joseph and the Raptors trailed the Cavs 2-0 in the Eastern Conference finals and looked to be dead in the water, but two wins at home put them right back in the thick of things. Joseph came up huge in Game 3 as he scored 14 points to go along with five rebounds and three assists in the 99-84 win on Saturday. He followed that up with an eight-point performance in the 105-99 win in Game 4 to tie the series. Joseph had just three points as nobody really played well for Toronto in Game 5.