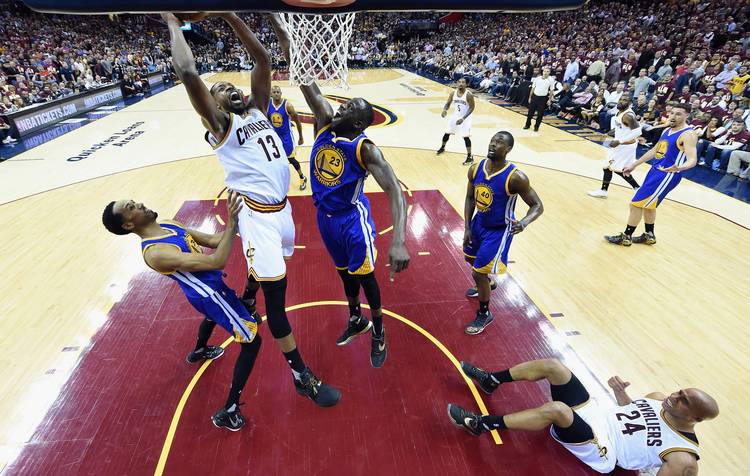 Tristan Thompson #13 of the Cleveland Cavaliers shoots the ball against Shaun Livingston #34 of the Golden State Warriors and Draymond Green #23 in Game 3 of the 2016 NBA Finals at Quicken Loans Arena on June 8, 2016 in Cleveland, Ohio. (Photo by Bob Donnan - Pool/Getty Images)

Tristan Thompson, F, Cleveland Cavaliers: Thompson and just about every Cavs starter had a great Game 3 in the NBA Finals as Cleveland blew out the Golden State Warriors 120-90 on Wednesday night. Thompson had his second double-double of the series, scoring 14 points to go along with 13 rebounds. Seven of his rebounds came on the offensive end. He made 5 of 6 shots in addition to dishing out two assists in 31 minutes on the floor. It was a nice way for him to bounce back after the 110-77 loss in Game 2 in which he had just eight points and five boards in 19 minutes.

Thompson even got a visit from a fellow Longhorn during media activities.

Myles Turner, a Longhorn in the 2014-15 season had some fun with Thompson during media availability. Turner made the NBA All-Rookie second team this season and finished 8th in Rookie of the Year voting.