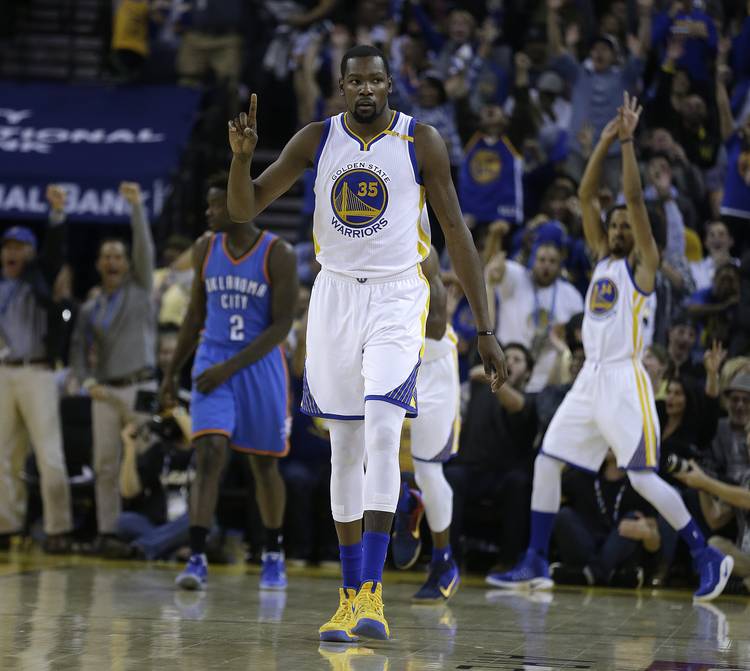 Golden State Warriors' Kevin Durant (35), one of eight Longhorns in the NBA, celebrates during the first half of the team's NBA basketball game against the Oklahoma City Thunder on Thursday, Nov. 3, 2016, in Oakland, Calif. (AP Photo/Ben Margot)

Here’s a look at how we ranked the eight Longhorns as the season started.

Kevin Durant, SF, Golden State—His debut was spoiled by the San Antonio Spurs, but he’s scored at least 20 points in every game so far. He’s averaging 30.6 points per game to go with 8.6 rebounds. He dropped a season-high 39 on his former team in Thursday’s 122-96 thrashing of the Oklahoma City Thunder.

LaMarcus Aldridge, PF, San Antonio—He scored 26 points, in addition to grabbing 14 rebounds, in the season-opening 129-100 win over the Warriors. Since then his scoring has dropped off a bit, but he did put up 21 in a losing effort against the Jazz on Tuesday. He’s averaging 18.8 points, 7.3 rebounds and .5 blocks per game.

Avery Bradley, PG, Boston—Bradley has been fantastic to start the season. He’s averaging 20.6 points per game to go with 8.2 rebounds and 4 assists. He’s shooting .484 from 3-point range, including an 8-for-11 performance in the 104-98 win over Charlotte on Saturday. The eight made 3-pointers was a career high.

Myles Turner, C, Indiana—Turner continues to improve in his second year in the league. He averaged 1.4 blocks per game as a rookie and has upped that to 2.4 for so far this season. His offensive game has also improved as his minutes have gone up this season as a starter. He’s had two double-doubles in five games, including a 30-point, 16-rebound performance in the season opening 130-121 win over the Mavs. He’s averaging 17.4 points and 7.8 rebounds per game, but it’s blocks like the one below that have fans going nuts.

Tristan Thompson, C, Cleveland—The defending NBA champion has contributed mostly with his rebounding ability this season. He’s had two double-doubles, including 15 points and 14 rebounds in the 128-122 win over the Celtics on Thursday. He’s had at least double digit rebounds in four of the five games he’s played in.

D.J. Augustin, PG, Orlando—He’s finding ways to contribute despite playing just 16 minutes per game this season. He had 8 points and 5 assists in Orlando’s 102-94 win over the Kings on Thursday. His season high came in a loss to the Cavs when he scored 13 points. He’s averaging 8 points per game, nearly two points below his career average.

Cory Joseph, G, Toronto—The backup to Kyle Lowery is playing 20.8 minutes per game and averaging 6 points and 2.5 assists, very close to his career averages. He has at least one steal in every game he’s played this season.

P.J. Tucker, SF, Phoenix—Tucker wasn’t much of a factor in the first three games of the season, playing just 18 minutes combined. He had 7 points and 6 rebounds when he played 27 minutes in the 116-98 loss to the Clippers on Monday. He had 3 points, 5 rebounds and 3 steals in the Suns’ first win of the season, 118-115 over the Trailblazers. He played 20 minutes in that game on Wednesday.