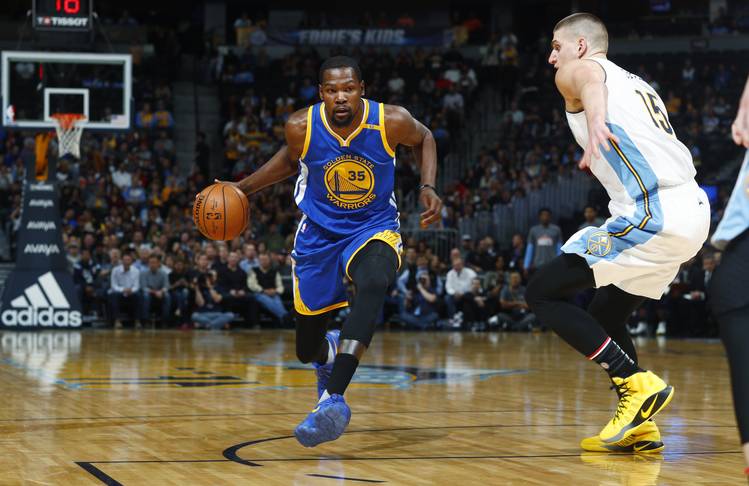 Kevin Durant, SF, Golden State—His streak of 20-point games finally came to an end in the 125-101 win over the Nuggets on Thursday. He sits tied with Michael Jordan at 72 straight games scoring at least 20 points. He put up 27 points in the Warriors’ second loss of the year, a 117-97 defeat to the Lakers, before scoring 22 against the Pelicans. His scoring high for the past week was 28 points against the Mavs. Durant’s 18-point performance against the Nuggets extended the Warriors’ win streak to three games.

LaMarcus Aldridge, PF, San Antonio—The Spurs have lost three out of the last four games but Aldridge has played pretty well in that stretch. He scored 19 points two games in a row, a win over the Jazz and a loss to the Clippers. He scored 14 in a 101-99 loss to the Rockets on Wednesday. He’s averaging 18.1 points per game along with 6.6 rebounds. Both are below his career averages as the Spurs struggle to solidify an identity after Tim Duncan’s retirement.

Avery Bradley, PG, Boston—Bradley’s averaging 19.7 points per game to go with 7.9 rebounds and 4.1 assists. He’s shooting .442 from 3-point range and is playing 37.5 minutes per game in November. The Celtics are in the midst of a three-game losing streak, including a 118-93 defeat to the Wizards on Wednesday. Bradley had 21 points in that game. He tied a season-high in rebounds, with 11, in the 123-107 loss to the Nuggets on Sunday.

Myles Turner, C, Indiana—Turner has scored in double digits in each of his last four games, including a 15-point, 9-rebound performance against the 76ers on Wednesday. The Pacers won that game 122-115. Turner is averaging 16.3 points per game and 7.1 rebounds. He’s playing a big role on defense as he blocks 2.6 shots per game. He had four blocks in the 111-94 win over the Bulls on Saturday. Here he is sending one back against the 76ers.

Tristan Thompson, C, Cleveland—Thompson has only played twice since the last time we checked in on him. He’s totaled seven points and 15 rebounds in those games combined. He’s averaging 9.6 rebounds per game, one rebound better than his career average.

D.J. Augustin, PG, Orlando—The Magic have lost two in a row after winning three straight. Augustin had seven points and five assists in their last win, an 88-86 victory over the Wizards on Saturday. He’s scoring 7.9 points per game so far this year as he backs up Elfrid Payton.

Cory Joseph, G, Toronto—Joseph, Kyle Lowery’s backup, is playing 18.9 minutes per game and averaging 5.7 points and 2.4 assists per game. He has at least one steal in every game he’s played this season. He scored eight points and had two assists in the 96-91 loss to the Kings on Sunday. He scored six points in the 112-102 win over the Thunder on Wednesday.

P.J. Tucker, SF, Phoenix—Tucker isn’t filling up the box score like he used to, but he’s still contributing in small ways. He’s averaging 3.1 points and 4.2 rebounds per game. He had 11 points and nine rebounds in a 124-121 loss to the Trailblazers on Tuesday. The Suns got back on the winning track the next night with a 107-100 win. Tucker contributed three points, six rebounds and two steals in the win.