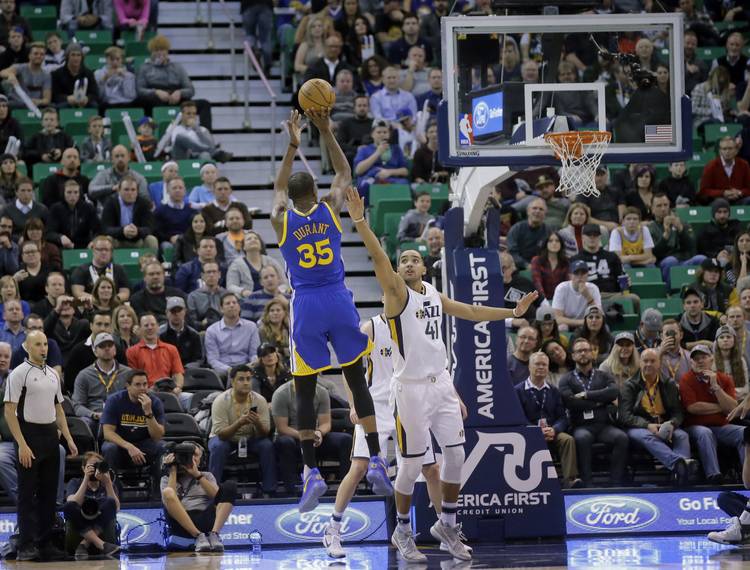 Kevin Durant, SF, Golden State—The Warriors won 12 games in a row before falling 132-127 to the Houston Rockets in double overtime to open December. Durant scored 39 points and grabbed 13 rebounds in the loss. Since then Golden State has won four straight, including a 115-98 win over the Clippers. Durant scored just 16 points in that win and it was the third time this season he hasn’t reached 20 points. That was inevitable given that he joined a loaded team. He managed 20 points in wins over Phoenix and Indiana and scored 21 in a win over Utah on Thursday.

LaMarcus Aldridge, PF, San Antonio—Aldridge hasn’t been the most productive in his last two outings. He scored just 10 points in the Spurs’ first road loss of the year, a 95-91 setback against the Bulls. He had just six points in the 105-91 win over the Timberwolves on Tuesday. He was a bigger factor in the 97-96 win over the Bucks on Monday, scoring 18 points to go with nine rebounds and five assists.

Avery Bradley, PG, Boston—Bradley’s offensive production has increased this season as he’s averaging 17.9 points per game. He’s also improved his rebounding tremendously, pulling down 7.8 per game, nearly five more than his career average. He’s scored in double figures in each game so far and has eight double-doubles. His most recent one coming in a loss to the Rockets when he scored 16 and pulled down 10 boards. Bradley is even shooting well from outside as his .407 percentage from 3-point range is in the top-30 of qualified players.

Myles Turner, C, Indiana—Turner started the season with a 30-point outburst but has only topped 20 points three times since then. Most recently he scored 20 points and made two blocks in the Pacers’ 109-94 win over the Suns. His defense around the rim has been excellent as he’s averaging 2.2 blocks per game. He hasn’t had a block in only three out of 22 games this season. Turner had back-to-back double-doubles to end November as he had 17 points and 12 rebounds against the Clippers followed by 19 and 10 against Portland.

Tristan Thompson, C, Cleveland—The Cavs uncharacteristically lost three in a row before they got back on the winning track this week. Thompson’s scoring isn’t what Cleveland needs so his career average is down. His rebounding and defense is what is helping the Cavs win. He has a block in all but four games this season and he’s averaging 10.3 rebounds a game. He has 34 boards in his last two games. He pulled down 14 against the Raptors to help halt the losing streak before grabbing 20 rebounds in the blowout of the Knicks.

D.J. Augustin, PG, Orlando—Augustin has scored in double digits twice in the past week. He shot .571 and scored 15 points in the 117-87 loss to the Celtics on Wednesday. Before that he contributed 12 points, three rebounds and three assists in a win over the Pistons on Sunday. He’s averaging 9.6 points per game this season.

Cory Joseph, G, Toronto—Joseph scored in double figures in three straight games during the Raptors’ six-game winning streak. He had 16 points and eight rebounds against the Grizzlies to close out November. He had 14 points against the Lakers in a blowout win before adding ten points and six assists in the win over the Hawks last Saturday. He’s averaging 8.5 points per game, two points better than his career average.

P.J. Tucker, SF, Phoenix—Tucker and the Suns are in the midst of a three-game losing streak with their last win coming at the end of November. Tucker scored 17 in that 109-107 win over the Hawks. His best game in the past week was a 9-point, 7-rebound performance against the Warriors last Saturday.

Creighton gets another upset win in NCAA Tournament