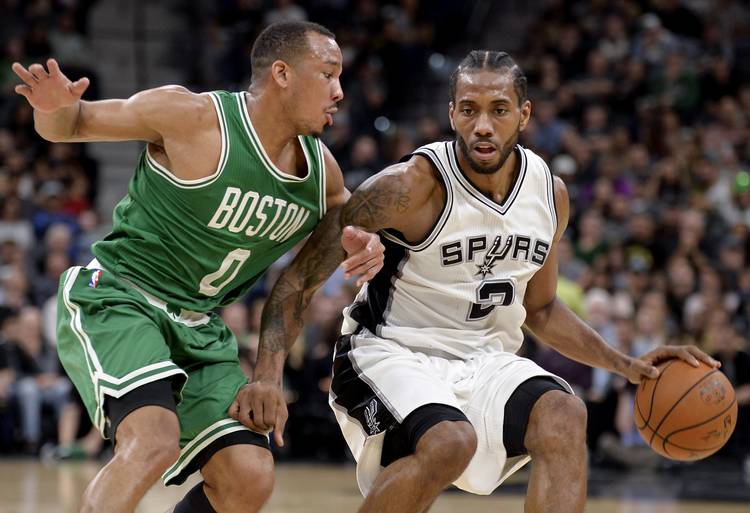 Kevin Durant, SF, Golden State—The Warriors have won seven of their last eight games with Durant’s help. He scored 21 in the unusual loss to the Grizzlies on Saturday, before the Warriors bounced back on Sunday. Durant had 22 in the win over the Timberwolves Sunday to go with eight rebounds. He dropped 27 points on the Pelicans and came up with two blocks in the game. Durant’s had at least two blocks in 11 of his last 14 games, including this chase-down effort against New Orleans.

Kevin Durant with the chase down block! #DubNation pic.twitter.com/yCoCdYxhPI

Durant was two rebounds shy of a triple-double in the 103-90 win over the Knicks on Thursday. He scored 15 points and grabbed 14 boards. But probably the most important news on Thursday was that you can now have him as an emoji on your phone.

LaMarcus Aldridge, PF, San Antonio—Aldridge has had some moderate success over his last two games, logging 12 points and nine rebounds in a blowout of the Nets before dropping 14 points and grabbing seven boards in a win over the Suns. He rested in the Spurs 108-101 win over Boston between those two outings.

Avery Bradley, PG, Boston—The Celtics had lost three straight through Thursday, though Bradley’s played well in that stretch. His best game came when he scored 25 points and had ten rebounds in the loss to the Spurs on Wednesday. Bradley also had six assists in the game.  He hasn’t had less than four rebounds in a game since Nov. 21. He’s averaging 18.2 points per game and 7.6 rebounds.

Myles Turner, C, Indiana—Turner has scored at least 20 points in two out of his last four games. He scored 26 to go along with eight rebounds in Thursday’s 102-95 loss to the Pelicans. He had 22 points and seven rebounds in the 110-94 win over the Hornets. He hasn’t notched a double-double since the last day in Nov. 30, but he’s already recorded 19 blocks in the month of Dec.

Tristan Thompson, C, Cleveland—Thompson notched a double-double in the 116-105 win over the Hornets on Saturday. He scored 13 points to go with 12 rebounds. Thompson’s Cavs lost 93-85 to the Grizzlies on Wednesday despite his 11 rebounds and seven points.

D.J. Augustin, PG, Orlando—Augustin scored ten points and dished out seven assists in a 121-113 loss to his former team, the Nuggets, last Saturday. He scored just three in a win over the Hawks on Tuesday, followed by a repeat three-point performance in Wednesday’s loss to the Clippers.

Cory Joseph, G, Toronto—The Raptors had won four straight through Thursday, with Joseph’s biggest contribution coming in the 123-114 win over the 76ers on Wednesday. He scored 13 points, collected five rebounds and dished out seven assists. He also had seven assists two days earlier in the 122-100 win over the Bucks.

P.J. Tucker, SF, Phoenix—Tucker had a chance to seal a win over the Knicks on Tuesday but he missed both free throws with one second to play. All was well that ended well, however, since the Suns had a two-point lead and the Knicks missed a desperation shot in the end. Tucker scored 13 points to go with seven rebounds in the win. On Sunday he was one point shy of a double-double as he hauled in ten rebounds.