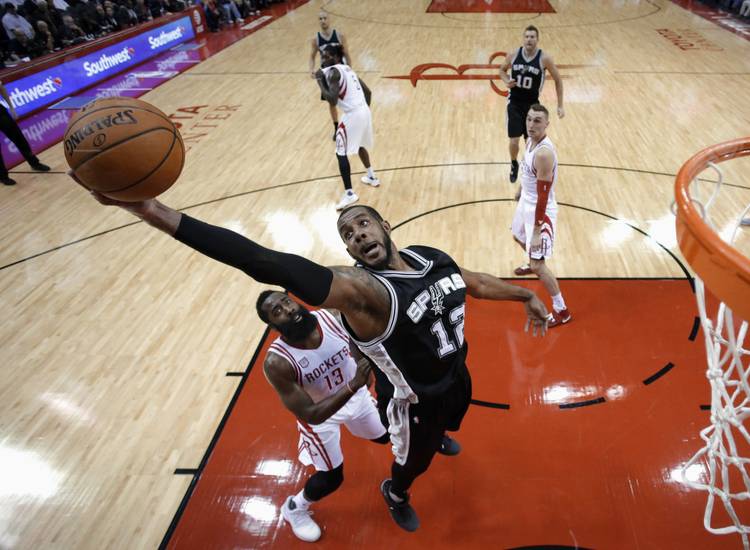 San Antonio Spurs' LaMarcus Aldridge (12) reaches for a rebound in front of Houston Rockets' James Harden (13) during the first half of an NBA basketball game Tuesday, Dec. 20, 2016, in Houston. (AP Photo/David J. Phillip)

Kevin Durant, SF, Golden State—The Warriors had won six straight games through Dec. 22 with Durant scoring at least 22 points in five of those games. He had 26 against the Nets on Thursday to go with nine rebounds and seven assists. His most devastating play came on a breakaway dunk over Brook Lopez. His biggest game this past week was a 34-point, 11-rebound performance in Saturday’s win over the Trailblazers. He also scored 22 in the win over Utah.

LaMarcus Aldridge, PF, San Antonio—The Spurs suffered their first setback since Dec. 8 when they lost 106-101 to the Clippers on Thursday. Aldridge had just ten points and four rebounds in the contest. He’s struggled to play consistently well with the Spurs, averaging 16.3 points per game and 6.7 rebounds. Those are both below his career averages. He did record a double-double in Tuesday’s big 102-100 win over the Rockets on the road. He had 17 points and ten rebounds in addition to five assists. He scored 22 points in the 113-100 win over the Pelicans on Sunday, going 10-for-10 from the free-throw line.

Avery Bradley, PG, Boston—After losing to the Spurs on Dec. 14, the Celtics went on to win four straight. Bradley scored 20 and had five boards in the 105-95 win over the Bulls on Sunday for his biggest scoring output of the week. He scored 16 in the win over Memphis on Tuesday before dropping 15 against the Pacers on Thursday. In last Friday’s win over the Hornets he scored 12 points and had seven rebounds.

Myles Turner, C, Indiana—Turner continues to prove his worth in his second year in the league, scoring at least 20 points in three of his last five outings. He scored 20 points and had eight rebounds in the Pacers’ last win, a 107-105 victory over the Wizards. He also had five blocks in the game. His 21-point, nine-rebound effort came in a loss to the Knicks on Tuesday. He had another four blocks in that game. He’s had at least one block in every game since Nov. 21.

Tristan Thompson, C, Cleveland—Thompson has rebounded well all season and pulled down 15 in the win over the Bucks on Wednesday. That was preceded by a 12-rebound performance the night before against the same team. He had a double-double that night, scoring ten points in the 114-108 win. He’s averaging 10.3 rebounds per game, nearly two better than his career average.

D.J. Augustin, PG, Orlando—Last Friday Augustin scored 17 to go along with six rebounds and four assists, but since then he’s had minimal scoring impact. He played just 13 minutes in the 109-79 loss to the Raptors on Sunday, going 0-for-4 and grabbing three boards. He scored seven points when the Magic bounced back against the Heat, 136-130. He also had six assists in the game. He had just two points in the 106-95 loss to the Knicks on Thursday.

Cory Joseph, G, Toronto—Though the Raptors lost 125-121 on Friday, Joseph played well as he scored 17 points in addition to dishing out four assists and collecting four rebounds. In Tuesday’s 116-104 win over the Nets he added 11 points and pulled down seven rebounds. That was one rebound short of his season high. He’s averaging 8.9 points per game, more than two points better than his career average.

P.J. Tucker, SF, Phoenix—In the past week, the Suns had lost three in a row leading up to Friday. Tucker’s best game came in a 10-point, six-rebound performance against the Rockets on Wednesday. He had a combined nine points in the two previous games.