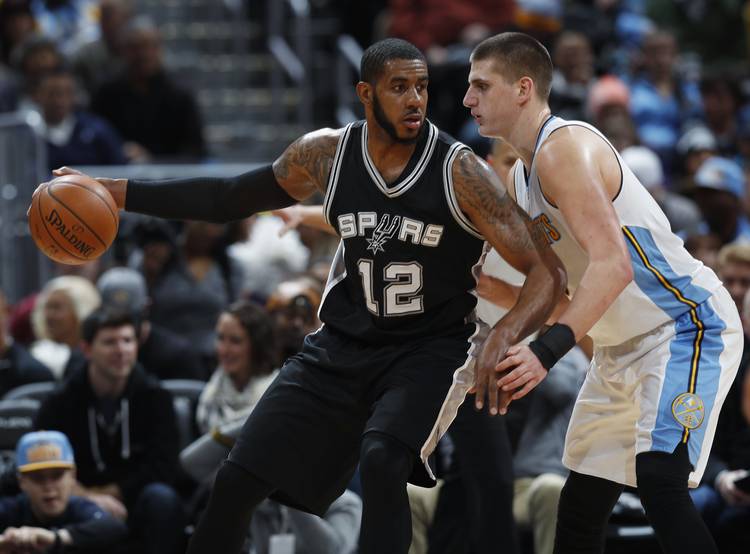 San Antonio Spurs forward LaMarcus Aldridge, left, works the ball inside to the rim as Denver Nuggets forward Nikola Jokic, of Serbia, defends in the first half of an NBA basketball game Thursday, Jan. 5, 2017, in Denver. (AP Photo/David Zalubowski)

Kevin Durant, SF, Golden State—The Warriors lost late on Friday night to the Grizzlies, falling 128-119 in overtime. They led by 24 in the game, but couldn’t hold on. Durant scored 27 points and pulled down 13 rebounds in the effort. Some signs of discontent began to show in Friday’s loss when Durant’s teammate Draymond Green appeared to react in frustration after Durant called an isolation play near the end of regulation. It’s hard to complain about Durant when he’s averaging 25.9 points per game and 8.8 rebounds. On Wednesday Durant scored 30 points as the Warriors topped the Trailblazers 125-117. He had 21 points in the 127-119 win over the Nuggets on Monday. Though he scored just 19 in the 108-99 win over the Mavs on Dec. 30th, it was in a triple-double effort. He collected 11 rebounds to go with ten assists.

LaMarcus Aldridge, PF, San Antonio—Heading into Saturday, Aldridge had a streak of six games averaging a least 60 percent shooting from the field. He had three straight games of scoring at least 23 points as well, heading into the weekend. He scored 27 points and 13 rebounds in Sunday’s 114-112 loss to the Hawks. He scored 23 and then 28 against the Raptors and Nuggets, both wins. He’s scoring 17.8 points per game and making one block per game.

Avery Bradley, PG, Boston—Bradley missed the Dec. 30th contest with Miami due to an illness but returned to action on Tuesday against the Jazz. He scored 14 points and played 36 minutes in the 115-104 victory. He scored 26, his highest output since Nov. 3, in the 110-106 win over the 76ers. Bradley knocked down six 3-pointers as the Celtics set a franchise record with 19. Bradley is currently dealing with a strained Achilles.

Avery Bradley was on 🔥🔥🔥 from beyond the 3-point arc n the first quarter (4-for-6 from deep)! #NBAVote pic.twitter.com/k65f2CUnHz

Myles Turner, C, Indiana—Turner and the Pacers had won three straight heading into Saturday. He scored 25 points, collected 15 boards and made five blocks in the 121-109 win over the Nets on Thursday. He had 17 points and seven rebounds in the win over Detroit on Tuesday. Before that he had another double-double, 23 points and 12 rebounds, in the win over the Magic on Sunday. He’s third in the league, averaging 2.5 blocks per game.

Tristan Thompson, C, Cleveland—Thompson’s had at least nine rebounds on each of his last three games though he hasn’t contributed much offense. His biggest offensive production in the last seven days was last Saturday when he scored 11 points to go with six rebounds and a steal.

D.J. Augustin, PG, Orlando—Augustin tied a season-high with 19 points, but the Magic came up short against the Rockets on Friday night. Augustin went 4-for-7 from 3-point range in the 100-93 loss. It was the most he’d scored since Nov. 11. In the Magic’s last win, Augustin had six points, two assists and a steal. Orlando defeated the Knicks 115-103 on Monday.

P.J. Tucker, SF, Phoenix—Phoenix won two in a row for just the second time all season this week. Tucker had four points and nine boards in the 102-95 win over the Mavs on Thursday. He added seven points, six rebounds and four assists in the 99-90 win over the Heat on Tuesday.

Cory Joseph, G, Toronto—The Raptors won two of their last three heading into Saturday. Joseph’s best game in that stretch came in a 110-82 loss to his old team the San Antonio Spurs. He had 11 points, three rebounds and three assists in the contest. He had eight points and seven assists in the 123-114 win over the Lakers on Sunday.

LISTEN: Charlie Strong on 1300 the Zone: ‘I’m better for having coached at Texas…’