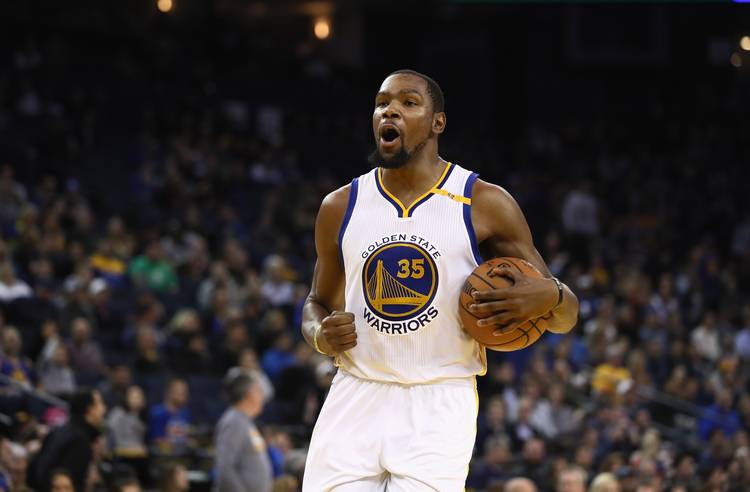 Kevin Durant #35 of the Golden State Warriors reacts after he was called for a foul against the Miami Heat at ORACLE Arena on January 10, 2017 in Oakland, California. (Photo by Ezra Shaw/Getty Images)

Kevin Durant, SF, Golden State—Since falling to the Grizzlies last Friday the Warriors have won three in a row. Durant recorded 28 points, seven rebounds, six assists and four blocks in the 117-106 win over the Kings on Sunday. He scored 28 again and pulled down eight boards in the 107-95 victory over the Heat on Tuesday. The Warriors defeated the Pistons 127-107 on Thursday with Durant scoring 25 points and dishing out nine assists. He’s averaging 26 points per game while pulling down 8.6 rebounds. That’s more than one rebound more than his career average. He’s also averaging a career-high 1.7 blocks per game.

LaMarcus Aldridge, PF, San Antonio—Aldridge has played just 58 total minutes in the last seven days as he sat out the game against the Bucks on Tuesday due to illness. He was well enough to play in the 40-point win over the Lakers on Thursday, but he scored just 13 points in 24 minutes. Before he got sick he had a double-double against the Hornets on Saturday. He scored 15 points and pulled down 11 rebounds. He’s averaging 21.2 points per game this month, his best so far this season.

Avery Bradley, PG, Boston—Bradley hasn’t played since Jan. 6 due to a strained Achilles. He’s averaging 18 points per game and seven rebounds, a career high. It seems like he’ll be able to return to action next week as he’s reported feeling better.

Myles Turner, C, Indiana—Turner had his 17-game double-digit scoring streak snapped in Thursday’s lopsided loss to the Nuggets in London. Foul trouble put him on the bench and his minutes were limited after with the game out of reach. He had nine points and six rebounds in the loss. Last Saturday he had a double-double, scoring 13 points and collecting ten rebounds in the 123-109 win over the Knicks.

D.J. Augustin, PG, Orlando—The Magic were in the midst of a four-game losing streak entering Friday. Augustin’s produced a seven-point, three-assist effort in the 105-96 loss to the Clippers Wednesday. He had six points and eight assists in the 111-95 loss to the Lakers on Sunday.

P.J. Tucker, SF, Phoenix—Phoenix has played just twice in the last seven days, falling in both contests. Tucker scored ten points and collected four rebounds in the 120-116 loss to the Cavs on Sunday. He had just two points, but grabbed eight boards in the 113-108 loss to the Mavs on Thursday. He’s averaging eight rebounds per game this month, a season high.

Cory Joseph, G, Toronto—Joseph scored double digits in two of his last three games heading into Friday. He had 14 points in the 123-118 loss to the Bulls last Saturday. He scored ten in the 129-122 loss to the Rockets. He’s averaging 8.8 points per game this month.

Austin tuned in for Sugar Bowl, not much else this bowl season