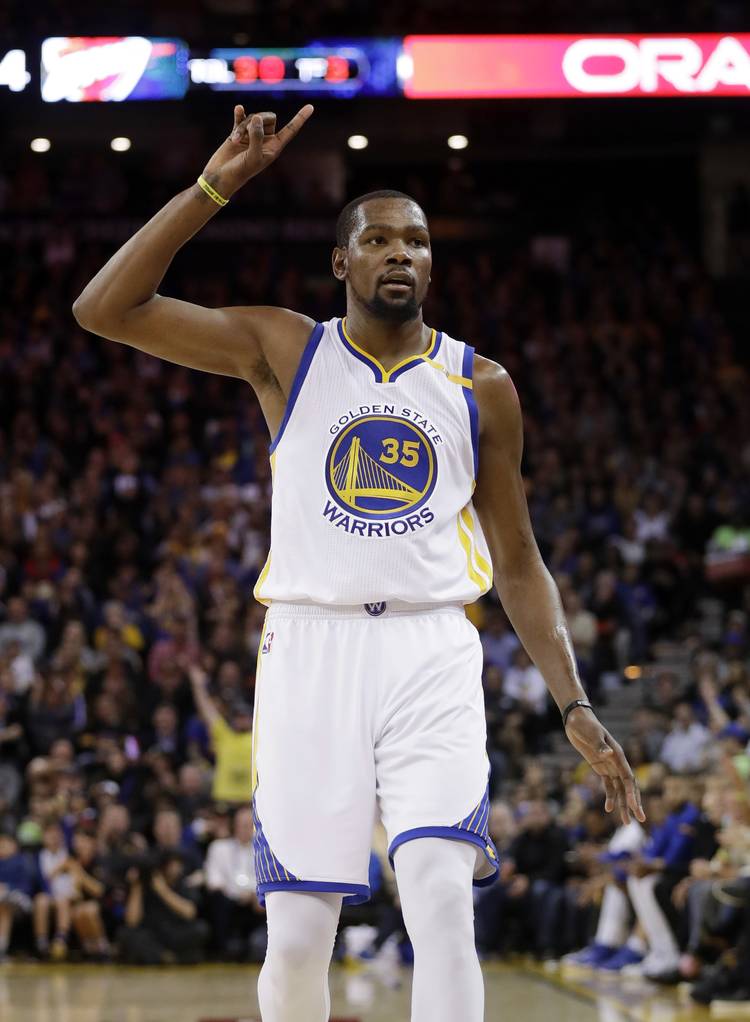 Kevin Durant, SF, Golden State—The Warriors had won five in a row entering Friday. Durant scored a season-high 40 points and pulled down 12 rebounds in what must have been a satisfying 121-100 win over the Thunder. He was 5-for-7 from 3-point range in the game. He’s on a seven-game streak of having scored at least 20 points. He had 21 in a big 126-91 win over the Cavs on Monday. His 26.2 points per game average this season is just shy of his career average of 27.3. He’s averaging 8.6 rebounds per game, over a rebound better than his career average. He was named an All-Star starter on Thursday.

LaMarcus Aldridge, PF, San Antonio—Aldridge had his best game after coming off an illness on Tuesday when he scored 29 points against the Timberwolves. The Spurs won the game 122-114 as Adlridge shot 60 percent from the field. He had 13 points in a 108-105 loss to the Suns last Saturday. He scored just 10 against the Nuggets on Thursday as he got into some foul trouble. His season averages in points and rebounds are down from his career numbers.

Avery Bradley, PG, Boston—Bradley missed four games due to a strained Achilles before returning on Monday. He played 33 minutes but contributed just five points in the 108-98 win over the Hornets. He missed the following game on Wednesday and is expected to miss Saturday’s game against Portland. He’s dealing with soreness and may have returned from the injury too soon.

Myles Turner, C, Indiana—Turner and the Pacers bounced back after a big loss to the Nuggets last Thursday. Turner had a double-double in the 98-95 win over the Pelicans on Monday, scoring 18 points and hauling in 12 rebounds. He also blocked four shots in the contest. He added 16 points on 78 percent shooting in a 106-100 win over the Kings on Wednesday. He’s averaging 15.7 points, 7.6 rebounds and 2.4 blocks this season, all career highs.

Tristan Thompson, C, Cleveland—Thompson hasn’t been as productive in his last three games. He scored nine points and collected four rebounds in last Friday’s 120-108 win over the Kings. In the 126-91 loss to the Warriors he had six points, five boards and three blocks. He added six rebounds and two blocks in the 118-103 win over the Suns on Thursday. He had just two points in the game.

D.J. Augustin, PG, Orlando—Augustin has scored double-digits in three of his last four games entering Friday. He had 15 in the 115-109 win over the Trail Blazers last Friday. He played just 12 minutes and went scoreless in Saturday’s loss to the Jazz before scoring 14 against the Nuggets on Monday. He added 10 points in the loss to the Pelicans on Wednesday. He’s averaging 8.8 points per game this season.

P.J. Tucker, SF, Phoenix—Phoenix had a surprise win over the Spurs on Saturday in which Tucker scored seven points in addition to collecting five boards. He also had four steals in the game. Despite losing on Monday to the Jazz, Tucker had a season-high 13 rebounds and eight points.

Cory Joseph, G, Toronto—Joseph scored 16 points and assisted on seven baskets in last Friday’s 132-113 win over the Nets. He’s had some quiet games in the past seven days, but he exploded for a season-high 33 points in the 119-109 win over the Nets on Tuesday. That upped his average to 11.1 points per game this month.

Texas men’s tennis team upset by Tulsa on the road

Countdown to Signing Day: Highest-rated Longhorn football recruits from out of state