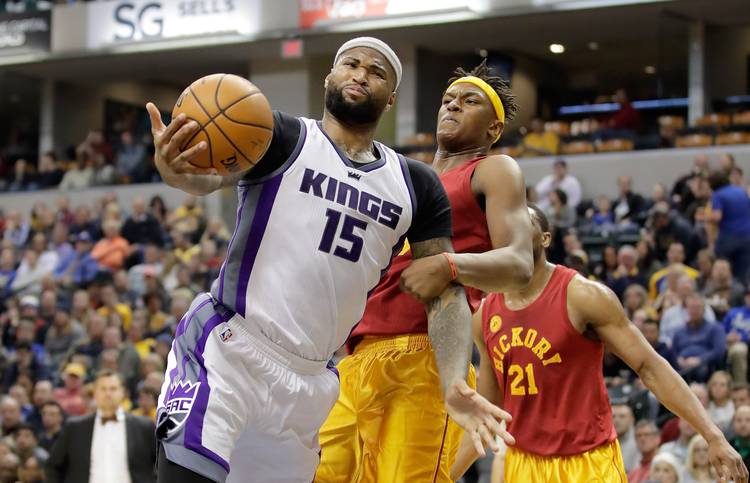 DeMarcus Cousins #15 of the Sacramento Kings is fouled by Myles Turner #33 of the Indiana Pacers at Bankers Life Fieldhouse on January 27, 2017 in Indianapolis, Indiana. (Photo by Andy Lyons/Getty Images)

Kevin Durant, SF, Golden State—The Warriors are on a five-game winning streak and Durant has scored at least 23 points in four of those games. In fact, he’s scored at least 18 points, grabbed at least eight rebounds and assisted on at least six buckets in each of his last three games. He had 26 points, 10 assists and eight rebounds in the 133-120 win over the Clippers on Thursday. The night before he scored just 18, but added eight assists and eight boards in a win over the Hornets. His 33-point, 10-rebound performance helped the Warriors edge the Trail Blazers 113-111 on Sunday. He scored 23 in the blowout win over the Clippers on Saturday.

LaMarcus Aldridge, PF, San Antonio—The Spurs lost back-to-back games for the second time this season on Sunday when they fell to the Mavericks 105-101. Aldridge scored 16 points and had seven rebounds in the contest. Last Friday they fell to the Pelicans 119-103 while Aldridge notched a double-double as he scored 14 and pulled down 14 rebounds. The Spurs got back to winning on Tuesday when they defeated the Thunder 108-94. Aldridge came up big, scoring 25 points to go with six boards and three blocks. He sat out Thursday’s contest with the 76ers as he’s dealing with a sore knee.

Myles Turner, C, Indiana—The second-year player has scored in double digits for nine straight games heading into Friday. He had 11 points three rebounds and a block in the 98-88 win over the Magic on Wednesday. He recorded his 10th double-double in the 120-101 win over the Rockets on Sunday. He had 18 points, 10 boards, four blocks and three steals in the win. Last Friday he had 14 points and a season-high four assists in the 115-111 win over the Kings. He’s had at least one block in 43 of his 48 games played.

Tristan Thompson, C, Cleveland—Thompson has recorded double-doubles in three out of his last four games with the Cavs winning every time he had one. In Wednesday’s 125-97 win over the Timberwolves he had 18 points and 14 rebounds. He recorded 19 points and 12 boards in Sunday’s win over the Thunder. He also had four steals and four blocks in the win. He had 10-and-10 in last Friday’s win over the Nets. In the Cavs only loss since we last checked in, Thompson played just 25 minutes and went scoreless with eight rebounds against the Mavs.

D.J. Augustin, PG, Orlando—Augustin had a season-high 21 points int he 114-113 win over the Raptors on Sunday. His only other double-digit game was a 10-point performance in Wednesday’s loss to the Pacers.

Cory Joseph, G, Toronto—The Raptors ended their five-game losing streak last Friday when they defeated the Bucks 102-86. Joseph contributed six points and five assists. Other than that, he’s been pretty quiet. He did have an eight-point, four-assist performance in the 109-104 loss to the Celtics Wednesday.

P.J. Tucker, SF, Phoenix—Entering Friday the Suns had lost five in a row. Tucker had scored in double digits in four straight games as well. He had 12 points, six rebounds and five assists in the 123-112 loss to the Nuggets on Saturday. He followed that up with an 11-point performance in the 115-96 loss to the Grizzlies on Monday. In Wednesday’s loss to the Clippers he recorded his first double-double since Jan. 22. He had 10 points and 14 rebounds in the 124-114 loss. He’s eclipsed double figures in scoring in six of his last seven games.