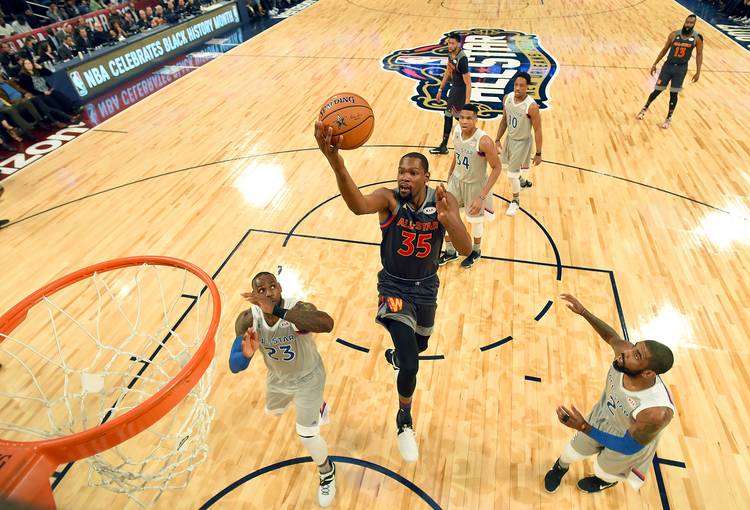 Kevin Durant #35 of the Golden State Warriors goes up for a shot against LeBron James #23 of the Cleveland Cavaliers during the 2017 NBA All-Star Game at Smoothie King Center on February 19, 2017 in New Orleans, Louisiana. (Photo by Bob Donnan - Pool/Getty Images)

Kevin Durant, SF, Golden State—Durant had a great all-around performance in the All-Star game, recording a triple-double as the West defeated the East 192-182. He scored 21 points, added 10 rebounds and 10 assists in the win. His best dish set up his former teammate at Oklahoma City, which the West bench seemed to love. Durant had a double-double when the Warriors resumed action on Thursday. He scored 25 points and pulled down 15 rebounds. He was three assists shy of a triple-double.

LaMarcus Aldridge, PF, San Antonio—Aldridge was on break for the All-Star and resumed action on Friday against the Clippers.

Myles Turner, C, Indiana—Turner has scored double digits in 18 straight games, and he’s had at least one block in 50 of his 57 games played. He participated in the NBA Rising Stars Challenge and scored 12 points and collected four rebounds. He also made a block and had a steal in the exhibition.

Tristan Thompson, C, Cleveland—Thompson has recorded four straight double-doubles, including his 10-point, 14-rebound performance against the Knicks on Thursday. He also had four blocks in the game. The Cavs have won four straight and Thompson has scored in double digits for five games in a row.

D.J. Augustin, PG, Orlando—Augustin scored seven points and assisted on two baskets in the Magic’s return after the All-Star break. They fell to the Trail Blazers 112-103 on Thursday.

Cory Joseph, G, Toronto—Joseph hadn’t played since the All-Star break entering Thursday. He will have some burnt orange company up in Canada now, however, as the Raptors have traded for P.J. Tucker.

P.J. Tucker, SF, Toronto—Speaking of Tucker, he was scheduled to make his Raptors debut on Friday after being traded from Phoenix.