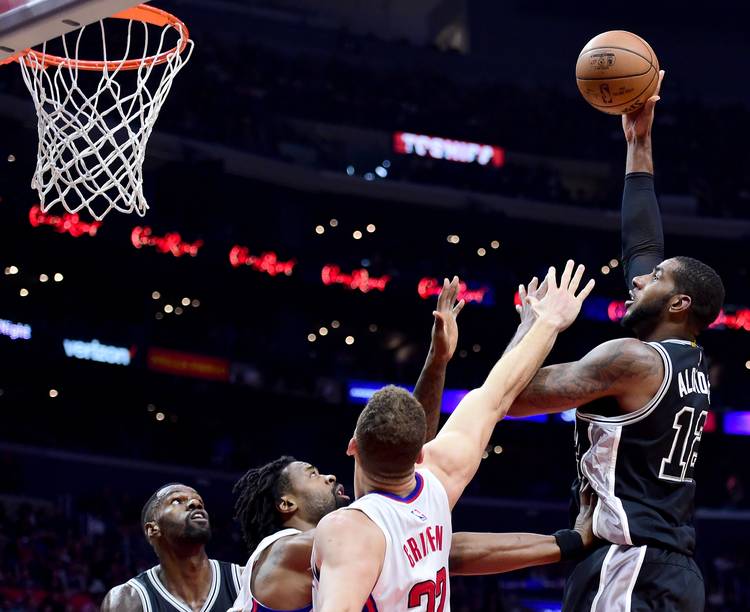 LaMarcus Aldridge #12 of the San Antonio Spurs scores on his shot over Blake Griffin #32 and DeAndre Jordan #6 of the LA Clippers during a 105-97 Spurs win at Staples Center on February 24, 2017 in Los Angeles, California. (Photo by Harry How/Getty Images)

Kevin Durant, SF, Golden State—Durant sprained his left MCL and has a bone bruise that will make him sit out the next few weeks, if not longer. He injured it in the 112-108 loss to the Wizards on Tuesday. He played in just two minutes of that game. Before that he scored 27 points and collected eight rebounds in the 119-108 win over the 76ers on Monday. His injury comes at a time when the Warriors need to continue to gel with their new teammate before the playoffs.

LaMarcus Aldridge, PF, San Antonio—Aldridge registered a double-double in the Spurs’ first game after the All-Star break, a 105-97 win over the Clippers. He scored 15 points and grabbed 11 rebounds in 34 minutes. He was a rebound short of another double-double a game later as San Antonio defeated the Lakers 119-98. Aldridge scored 16 points and had nine boards in the contest. He was 8 for 14 from the field in just 23 minutes. Aldridge had just six points in the 100-99 win over the Pacers three days later.

Myles Turner, C, Indiana—Turner has scored double digits in 21 straight games, and he’s had at least one block in 53 of his 61 games played. He scored 16 points and had three steals in Wednesday’s loss to the Spurs. He had 12 points, three blocks and six rebounds in the 117-108 win over the Rockets on Monday. His 18 points led the Pacers in the 113-95 loss to the Heat on Saturday. Turner scored 12 points and added six rebounds, three steals and two blocks in last Friday’s 102-92 win over the Grizzlies.

Avery Bradley, PG, Boston—Bradley returned to action on Monday after not having played since Jan. 16th. He had six points and three steals in 15 minutes in the 114-98 loss to the Hawks. Bradley played 22 minutes in his next game and helped the Celtics defeat the Cavs with some ridiculous defense. He scored 11 points and had two rebounds in the 103-99 win on Wednesday.

Tristan Thompson, C, Cleveland—Thompson had nine rebounds and five assists in the 117-99 loss to the Bulls on Saturday. He followed that up with eight points and eight rebounds in the win over the Bucks on Monday. He was one point shy of a double-double in Wednesday’s loss to the Celtics. He had 13 rebounds in the game.

D.J. Augustin, PG, Orlando—Augustin helped the Magic top the Hawks on Saturday as he scored eight points and had two assists in the 105-86 win. He scored 15 points on Wednesday, but the Magic fell to the Knicks 101-90. He averaged 6.8 points per game in February, nearly two points fewer than January.

Cory Joseph, G, Toronto—Joseph has scored in double figures in four out of the last six games entering Friday. Joseph scored 11 points in the 105-96 loss to the Wizards. He had 14 points and six assists in the 112-106 win. He had six assists in his previous game, a 107-97 win over Boston last Friday, to go along with 11 points.

P.J. Tucker, SF, Toronto—Tucker was one point shy of notching a double-double in his Raptors debut last Friday. He had nine points, 10 rebounds and three steals in the 107-97 win over the Celtics. The Raptors won two more games after that, but Tucker had just four points over the course of those two games. He had four points and five rebounds in the 105-96 loss to the Wizards on Wednesday.