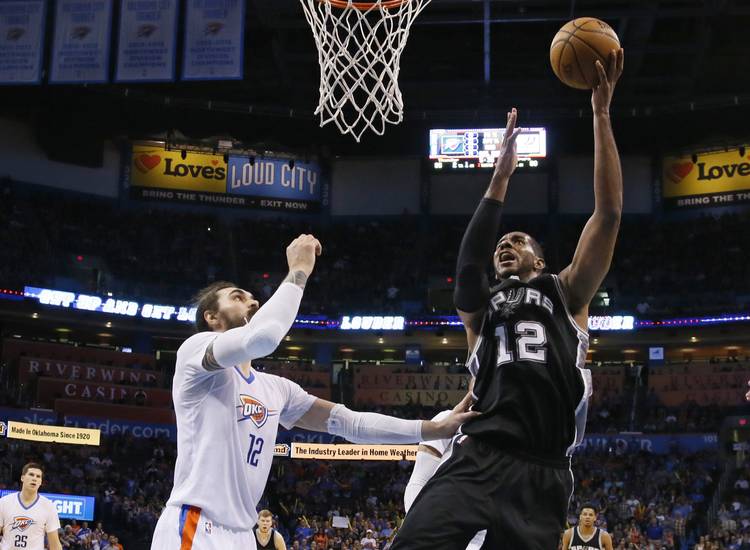 Kevin Durant, SF, Golden State—Durant is making progress with his sprained knee, riding a bike and shooting from a chair. His head coach Steve Kerr is still uncertain when his All-Star will return to action. The Warriors are 2-3 since Durant left the lineup with his injury.

LaMarcus Aldridge, PF, San Antonio—Every loss for the Warriors is to the benefit of Aldridge and the Spurs lurking two games back in the Western Conference. Aldridge and San Antonio had won nine in a row until Thursday’s 102-92 loss to the Thunder. Aldridge had 17 points and six rebounds in the contest. Over last weekend he notched two straight double-doubles. He scored 21 points and grabbed 15 rebounds in the 101-98 win over the Pelicans before scoring 18 and hauling in 10 boards against the Timberwolves on Saturday. He had 15 points, four rebounds and four assists in a big 112-110 win against the Rockets on Monday before sitting out Wednesday’s game to rest.

Myles Turner, C, Indiana—Turner’s streak of scoring in double digits ended at 22 games when he scored just five points in the 97-96 win over the Hawks on Sunday. He’s had a total of 12 points in two games since then. He’s still playing big minutes so he might just be in an offensive slump. He’s had at least one block in 56 of his 64 games played. He had two blocks in the win over Atlanta and blocked three shots against the Hornets on Monday. He had eight points, five rebounds, five assists and two blocks in Wednesday’s win over the Pistons.

Avery Bradley, PG, Boston—Bradley has been getting back into the groove after missing a lot of action. He scored 15 points to go along with four rebounds and four assists in the 115-95 win over the Lakers last Friday. After missing Sunday’s game due to hamstring soreness against the Suns, he scored 14 in Monday’s loss to the Clippers. He contributed 12 points, six rebounds and a block in the 99-86 win over the Warriors on Wednesday. He’s averaging 13 points and 3.8 rebounds this month.

P.J. Tucker, SF, Toronto—Tucker is playing significant minutes with his new team, averaging 28 a night in March. He had six points and three boards in the 114-106 win over the Wizards last Friday. He scored nine and pulled in four rebounds in Saturday’s loss to the Bucks. He chipped in eight points and six rebounds in Wednesday’s win over the Pelicans.

Cory Joseph, G, Toronto—Joseph has scored in double figures in four straight games entering Friday. He had 11 in the Raptors 94-87 win over the Pelicans on Wednesday. He also had five rebounds and five assists in the game. In Saturday’s loss to the Bucks he scored 14 points and assisted on eight baskets while collecting five boards. Last Friday he scored 15 points in the 114-106 win over the Wizards. He’s had at least five rebounds in three straight games.

D.J. Augustin, PG, Orlando—Entering Friday, Augustin had hit at least one 3-pointer in nine straight games. Last Friday he had eight points in the 110-99 win over the Heat. In Sunday’s loss to the Wizards he scored eight and assisted on four baskets. He had seven points in Wednesday’s 98-91 win over the Bulls.