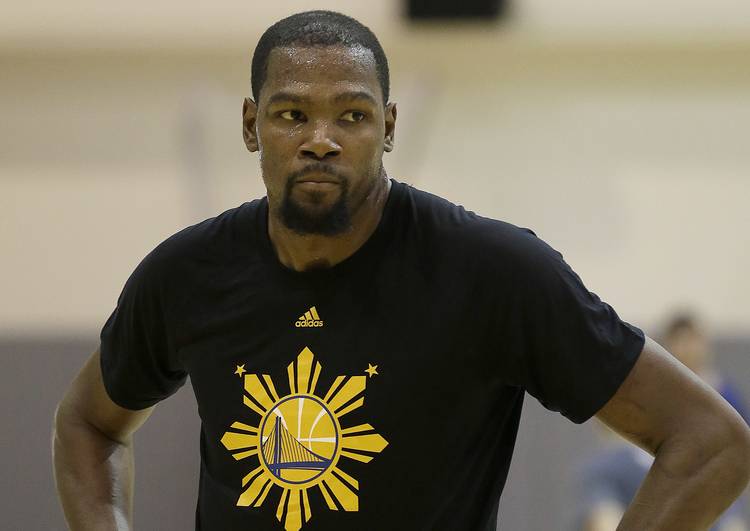 Kevin Durant, SF, Golden State—Durant is set to return to action on Saturday against the Pelicans after missing 19 games due to a knee injury. The Warriors didn’t miss him much—they’re currently on a 13-game winning streak—which makes it interesting to see how he gets reacquainted with his relatively new teammates. Golden State struggled with Durant out of the lineup early on, losing five out of seven games. We’ll see how he performs as the playoffs are set to begin on April 15.

LaMarcus Aldridge, PF, San Antonio—With the Spurs not playing for much after falling to the Warriors on March 29, Aldridge has had moderate success. He notched a double-double in the 100-95 win over the Thunder last Friday. He scored 14 points and pulled down 10 rebounds to go along with three blocks. He had 15 points in the overtime win over Memphis on Tuesday, including this layup that sent the game to an extra period.

Aldridge may need to pick up his game a bit in the playoffs if the Spurs want to seriously challenge the Warriors and hold off teams like the Rockets, Jazz and Clippers. The veteran hasn’t scored at least 20 points in a game since March 23. He’s only had double-digit rebounds twice in that stretch.

Myles Turner, C, Indiana—After dropping four straight, the Pacers have back-to-back wins in the last week. Turner scored 10 points  and collected six rebounds in the 104-89 win over the Bucks on Thursday. With three games to go in the regular season, Indiana has a half-game lead on the Heat for the final spot of the playoffs in the Eastern Conference. Just one of their remaining games is against a team above .500. Turner’s had a solid second season, averaging 14.3 points and 7.2 rebounds per game. His 2.1 blocks per game are good for fourth-best in the NBA. Here are some of his best blocks.

Myles Turner has made a NAME for himself on defense already!

Hear how he’s made it a focus for his career. Driven to Protect 👉 @Mobil1 pic.twitter.com/gbwse3CgYt

Avery Bradley, PG, Boston—The Celtics had taken over the No.1 seed in the Eastern Conference but have lost two in a row to fall a game and a half behind the Cavaliers. Bradley had just four points to go with seven rebounds in Wednesday’s 23-point loss to the Cavs.  He had 17 points and this poster dunk in the 123-116 loss to the Hawks on Thursday.

It was Bradley’s biggest scoring output since he had 18 against the Pacers in a win on March 22.

Tristan Thompson, C, Cleveland—After losing five out of seven, the Cavs are back on a roll as they’ve reeled off four straight wins. Thompson had 12 points and nine rebounds in the 135-130 win over the Pacers on Sunday. He currently has a sprained thumb and missed the Cavs’ big win over the Celtics. Thompson’s averaging 8.1 points and 9.2 rebounds per game to go with 1.1 blocks.

Cory Joseph, G, Toronto—Joseph ended March averaging 11.6 points and 5.1 assists per game. He also averaged 4.1 rebounds per game in the month. He’s still contributing quality minutes to the 3rd-place Raptors. He had 15 points and five boards in the 105-102 win over the Pistons on Wednesday. He scored 10 points in Tuesday’s loss to the Pacers. He’s averaging 11.3 points in April so far.

P.J. Tucker, SF, Toronto—Tucker’s move to a playoff contender has his numbers a bit down, but he continues to fill up a box score in a lot areas. He had nine points, four rebounds, an assist and a steal in Wednesday’s win over the Pistons. He had nine points the previous night, though the Raptors fell to the Pacers. He’s averaging 6.8 points, 5.8 rebounds and 1.2 assists per game this season.

Isaiah Taylor, PG, Houston—Taylor got the call up to the Rockets on Feb. 27, but you’re not going to get a lot of minutes if you’re the third point guard on the team. Though Taylor has been with the Rockets for over a month, he didn’t log a single minute until Sunday’s 123-116 win over the Suns. He played 15 minutes and scored three points to go along with one rebound, a block and a steal. He was 1 for 3 from the field and went 1 for 2 from the free-throw line.

D.J. Augustin, PG, Orlando—The Magic got back in the win column on Thursday after falling in five straight games. Augustin had five points and two rebounds in the win. His minutes dropped to 16.2 per game in March as he averaged seven points per game for the month. He’s currently playing 15.5 minutes per game in April.