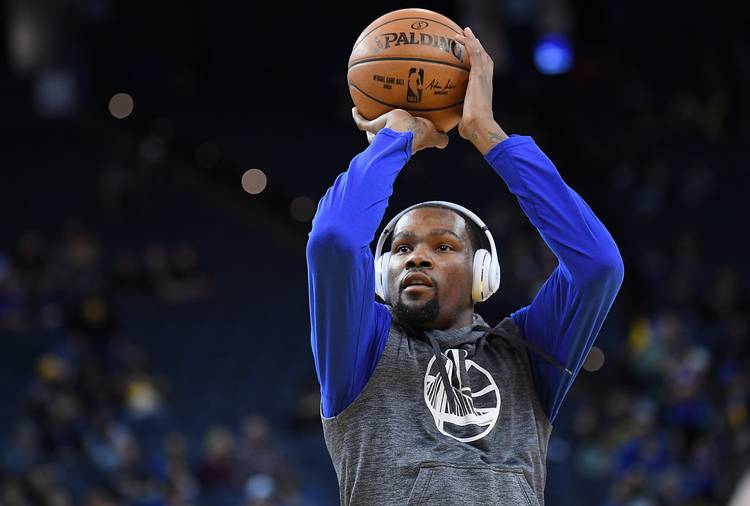 Kevin Durant #35 of the Golden State Warriors warms up prior to the start of an NBA Basketball game against the New Orleans Pelicans at ORACLE Arena on April 8, 2017 in Oakland, California. (Photo by Thearon W. Henderson/Getty Images)

Kevin Durant, SF, Golden State—Durant returned to action on Saturday, playing 31 minutes and scoring 16 points in the 123-101 win over the Pelicans. He also had 10 rebounds and six assists in the contest. In fact, he had those identical numbers in the next game against Utah. He got in an offensive groove against the Lakers on Wednesday, scoring 29 points on 11 of 16 shooting, including 5 of 7 from 3-point range. He had been 0 for 9 from beyond the arc in his previous two games combined. He ended the regular season averaging 25.1 points, 4.8 assists and 8.3 rebounds per game. We’ll see how well things shape up for the top-seeded Warriors as they start the first round of the playoffs against the Trail Blazers on Sunday.

LaMarcus Aldridge, PF, San Antonio—The Spurs have been locked into the No. 2 seed in the West for some time and it’s shown as they’ve lost three of their last four to close out the regular season. Aldridge had 18 points, five rebounds and three steals in the season finale against Utah. He averaged 17.3 points per game this season as the second, sometimes third, option behind Kawhi Leonard. That mark is his lowest since his rookie season when he averaged nine points a game. His 7.3 rebounds per contest is also the second lowest average of his career. It will be interesting to see how well he performs in the playoffs with a lot more on the line. The Spurs host Memphis on Saturday at 7 p.m.

Myles Turner, C, Indiana—After dropping four straight, the Pacers closed the regular season with five straight wins to qualify for the playoffs as the seventh seed. Turner had two double-doubles in that stretch. He had 23 points and 10 rebounds in the 127-112 win over the Magic on Saturday. He scored 18 and pulled down 13 boards on Monday against the 76ers. He also had four blocks in that game. Turner followed that up with a game in which he tied a career-high six blocks in the season finale. He’ll have to do some protecting of the rim if the Pacers stand a chance against LeBron James and the defending champion Cavaliers.

Avery Bradley, PG, Boston—The Celtics won nine of their last 12 games to wrestle away the No. 1 seed in the East from Cleveland. Bradley scored 18 points and added five rebounds in Monday’s 114-105 win over the Nets. Before that he scored 15 against the Hornets to go with six rebounds. In addition to his usual stout defense, Bradley improved on his rebounding immensely this season. He pulled down 6.1 boards per game this year, three more than his career average. He also increased his scoring from a 12.1 career average to 16.3 per game this season. He’s dishing out more assists as well, providing 2.2 per game. The Celtics open the playoffs hosting the Bulls on Sunday.

Tristan Thompson, C, Cleveland—The Cavs followed up a four-game winning streak with a four-game losing streak and suddenly find themselves in the No. 2 slot of the Eastern Conference playoff seeding. Thompson had a bad thumb sprain and missed four of the Cavs’ final five games. He produced pretty well when he returned to the lineup on Wednesday, scoring 10 points and grabbing four rebounds in just the first half. The Cavs start their title defense on Saturday when Thompson will face off against another former Longhorn, Myles Turner of Indiana.

Cory Joseph, G, Toronto—The Raptors are the third seed in the East and Joseph logged quality minutes off the bench all season. He played little in the season finale win over the Cavs, but he scored 14 points and pulled down four rebounds in the 96-94 win over the Heat last Friday. He finished the season averaging 9.3 points per game and 3.3 assists, both better than his career averages.

P.J. Tucker, SF, Toronto—Tucker finally gets to see what the NBA playoffs are like, qualifying for the first time with the Raptors this year. He’s logging 20-plus minutes with his new team after being traded from Phoenix. He averaged 6.7 points per game and 5.8 rebounds this season. He’s the type of player that does the little things that all quality teams could use off the bench. He’s battling a cold right now, but he should see action when the Raptors host the Bucks on Saturday.

Isaiah Taylor, PG, Houston—Taylor got the call up to the Rockets on Feb. 27, but he didn’t log a single minute until Apr. 2nd’s win over the Suns. He played 15 minutes and scored three points to go along with one rebound, a block and a steal. He was 1 for 3 from the field and went 1 for 2 from the free-throw line. He played against Sacramento on Sunday and the Clippers on Monday, but didn’t score. He did have three assists in 24 minutes against the Clippers. If he gets any playing time against the Thunder on Sunday it would be pretty surprising.

D.J. Augustin, PG, Orlando—The Magic closed out the season losing two of their last three games. Augustin had four assists and two rebounds in their season finale win over the Pistons. Of the nine former Longhorns in the NBA, Augustin is the only one not making a trip to the playoffs. He finished the season averaging 7.9 points a game and 2.7 assists.

Longhorns softball wins second in a row over Texas Tech