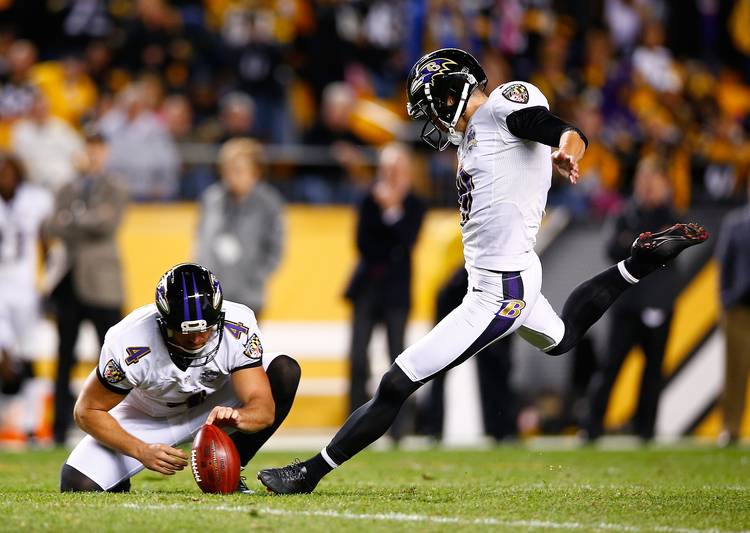 Justin Tucker hit a 52-yard field goal in overtime to get his Ravens the win over the Steelers on Thursday night. He knows a thing or two about big kicks. (Photo by Jared Wickerham/Getty Images)

Is there such a thing as a former Longhorn? These players will always be Longhorns to University of Texas fans, even though they’ve graduated to the next level of football. Every Tuesday, we’ll update you on how they performed the previous weekend. Here’s a look at the Longhorns in the NFL and how they fared in Week 4.

Justin Tucker, Ravens kicker—Tucker knows a thing or two about making big kicks. You might remember this one.

His latest game-winner came at the expense of the Pittsburgh Steelers on Thursday night as he nailed a 52-yarder to give the Ravens an overtime win they probably didn’t deserve.

Earl Thomas, Seahawks safety—Thomas had five tackles in the Seahawks’ win over the Lions on Monday night. He has 19 tackles and a forced fumble so far this year.

Quandre Diggs, Lions cornerback—He had one tackle against the Seahawks on Monday night. He missed out on his first touchdown on a scoop and score in Week 3 when the refs blew the play dead on a fumble by Denver.

Keenan Robinson, Redskins linebacker—He had three tackles against the Eagles and leads his team on the season with 27 total tackles.

Henry Melton, Buccaneers defensive tackle—The seventh-season pro, who dabbled a little at running back at Texas, registered two tackles against the Panthers. He has a sack, a tackle for loss and a forced fumble so far this season.

Jordan Hicks, Eagles linebacker—He’s making the most of his time in Philadelphia as he’s tied for second on the team with 23 total tackles in his rookie season. He had six tackles against the Redskins in Sunday’s loss. On the season he has a sack, a forced fumble, an interception and two recoveries.

Sam Acho, Bears linebacker—Acho recovered a fumble and recorded three tackles in the Bears’ win over the Raiders on Sunday.

Jackson Jeffcoat, Redskins linebacker—Jeffcoat recorded his first tackle of the season in the win over the Eagles.

Fozzy Whittaker, Panthers running back—Whittaker had a kickoff return of 26 yards and one reception for ten yards. Any impact he makes will likely be on special teams. He’s only had two kickoff returns so far this season, but he’s averaging 29.5 yards per return.

Adrian Phillips, Chargers safety—He had three tackles in the win over the Browns and has six for the season.

Phil Dawson, 49ers kicker—The 40-year-old provided the only points for the 49ers in Sunday’s loss to the Packers when he hit a 33-yard field goal. He’s 20th in all-time scoring in the NFL with 1,535 points, which includes a touchdown he scored in his first season on a fake field goal.

Alex Okafor, Cardinals linebacker—He had two quarterback hits in the Cardinals surprising loss to the Rams.

Kenny Vaccaro, Saints safety—He had three total tackles against the Cowboys on Sunday night. He has 23 tackles, second best on the team, on the season and two pass deflections.

Michael Griffin, Titans safety—He was off this week, but he’s second on the team with 17 tackles and he has a pass deflection.

Malcom Brown, Patriots defensive tackle—He’s got four tackles and a sack so far this season. The Patriots were off last week.

Lyle Sendlein, Cardinals center—He’s started all four games for Arizona, but the offensive line gave up four sacks to St. Louis on Sunday.

Brian Robison, Vikings defensive end—The nine-year veteran has 11 tackles, a sack and two pass deflections through four games. His sack came this past Sunday against the Broncos.

Tarell Brown, Patriots cornerback—Brown started the first two games for the Pats but didn’t play against Jacksonville in Week 3. New England was on a bye in Week 4.

Brian Orakpo, Titans linebacker—He has six total tackles this year, a sack and a tackle for loss. The Titans were off last week.

Roy Miller, Jaguars defensive tackle—He’s in his seventh season, third with Jacksonville, and registered two tackles on Sunday against the Buccaneers.

Geoff Swaim, Cowboys tight end—He’s had one reception with one game played as he’s behind Jason Witten and Gavin Escobar on the depth chart.

Marquise Goodwin, Bills wide receiver—Did not play and has yet to play in the regular season as he’s dealing with a rib injury. He was practicing on a limited basis as of last week.

Aaron Williams, Bills safety—Did not play and has missed the last two games with a neck injury.