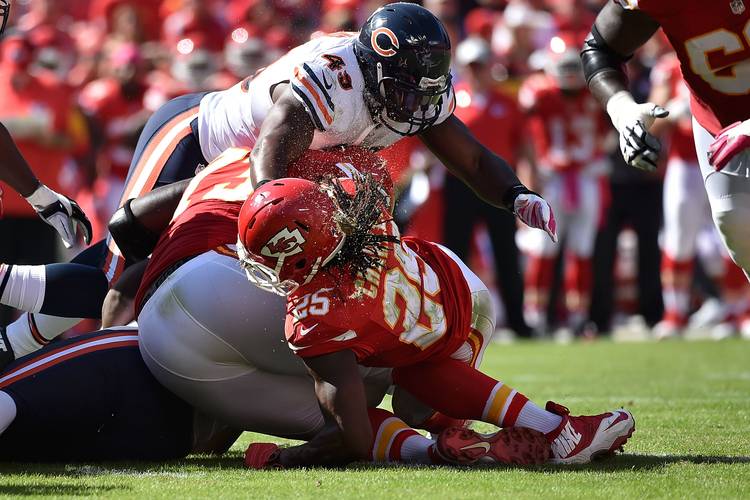 Two fellow Longhorns clashed on the play that hurt Jamaal Charles. He had crumbled to the ground before the hit by Sam Acho, however. (Photo by Peter Aiken/Getty Images)

Is there such a thing as a former Longhorn? These players will always be Longhorns to University of Texas fans, even though they’ve graduated to the next level of football. Every Tuesday, we’ll update you on how they performed the previous weekend. Here’s a look at the Longhorns in the NFL and how they fared in Week 5.

Jamaal Charles, Chiefs running back—Charles rushed for 58 yards and caught a pass for 26 yards but none of that mattered when it became apparent that he tore his ACL. He’ll be out for the rest of the year.

Cory Redding, Cardinals defensive end—He had an interception, one of six turnovers forced by the Cardinals, and returned it 30 yards before being tripped up by Matthew Stafford just five yards from the end zone. Longhorns fans remember another interception return of his back in 2001 where he wasn’t tripped up and somersaulted into the end zone.

That play was the first score of the Longhorns’ 44-14 win over North Carolina. Texas scored a late touchdown and opted not to kick the extra point in that game to honor the memory of fallen teammate Cole Pittman who died in a car crash before the season. Pittman’s jersey number was 44.

Roy Miller, Jaguars defensive tackle—He had five tackles and sacked Jameis Winston. He was an instant away from forcing a fumble as Winston attempted a backwards pass when Miller was pressuring. The official review ruled that Winston’s knee was down, however, crediting Miller with the sack.

Earl Thomas, Seahawks safety—He suffered a tough loss at the hands of the Bengals but he had two tackles and an interception which he returned for 32 yards to set up a field goal at the end of the first half.

Justin Tucker, Ravens kicker—He made all three extra points and a 23-yard field goal but he missed from 51 yards late in the first half.

Quandre Diggs, Lions cornerback—He had just one tackle in his team’s fifth straight loss to start the season.

Keenan Robinson, Redskins linebacker—He had four total tackles against the Falcons to put him at 31 on the season to lead the Redskins.

Sam Acho, Bears linebacker—He had six total tackles and a pass deflected to lead the Bears on Sunday. He was also in on the play that injured Charles, though the injury was most likely non-contact.

Lamarr Houston, Bears linebacker—He sacked the quarterback, his first of the year, and had three tackles on the day.

Alex Okafor, Cardinals linebacker—He had three tackles, a pass defended and a quarterback hit as his team demolished the Lions 42-17.

Derrick Johnson, Chiefs linebacker—He made six tackles, second most on the team on Sunday. He’s tied for the team lead with 26 on the year.

Adrian Phillips, Chargers safety—Phillips was waived when Antonio Gates became available after serving a suspension. If he clears waivers he could be added to the practice squad unless a spot opens up on the 53-man roster.

Phil Dawson, 49ers kicker—As reliable as ever, Dawson was 3 for 3 on extra points and hit two field goals with a long of 43 yards.

Kenny Vaccaro, Saints safety—It’s typically not a good thing when your safety leads the team in tackles. Vaccaro led the Saints with 11 on Sunday.

Michael Griffin, Titans safety—Six total tackles was second best on the team in a tough 14-13 loss to the Bills. He’s registered at least five tackles in every game this year.

Tarell Brown, Patriots cornerback—He had his best game of the year, getting in on seven tackles in the Patriots big win over the Cowboys.

Malcom Brown, Patriots defensive tackle—Two assisted tackles against the Cowboys put him at six total for the season. He does have one sack, which he picked up in Week 1.

Brian Orakpo, Titans linebacker—Logged one tackle. Has at least one tackle in each game so far. Had a sack in Week 3.

Geoff Swaim, Cowboys tight end—Was on the active roster for the second time this season but didn’t registered a stat.

Lyle Sendlein, Cardinals center—Started the game in which the Cardinals rushed for 187 yards, 7.5 yards per carry.

Marquise Goodwin, Bills wide receiver—He made his season debut coming off of injury and had two catches for 24 yards.

Aaron Williams, Bills safety—He was second best in tackles with seven against the Titans.

Jackson Jeffcoat, Redskins linebacker—Didn’t register a stat, still has a single tackle for the season.

Colt McCoy, Redskins quarterback—Backed up Kirk Cousins in the Redskins overtime loss to the Falcons.

Henry Melton, Buccaneers defensive tackle—Didn’t log a stat against the Jaguars on Sunday.