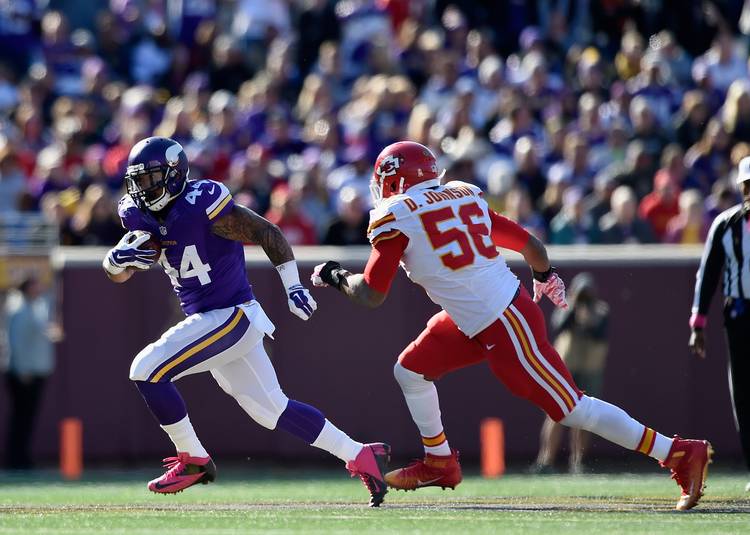 Derrick Johnson led the Chiefs in tackles on Sunday against the Vikings. (Photo by Hannah Foslien/Getty Images)

Is there such a thing as a former Longhorn? These players will always be Longhorns to University of Texas fans, even though they’ve graduated to the next level of football. Every Tuesday, we’ll update you on how they performed the previous weekend. Here’s a look at the Longhorns in the NFL and how they fared in Week 6.

Keenan Robinson, Redskins linebacker—He was the second leading tackler for Washington on Sunday, with 10 total tackles.

Jordan Hicks, Eagles linebacker—The rookie is getting it done in Philly, logging ten tackles to lead his team and a tackle for loss in the win over the Giants.

Sam Acho, Bears linebacker—He had five tackles and a tackle for loss in the Bears’ close defeat at the hands of the Lions.

Derrick Johnson, Chiefs linebacker—He tied the team lead with nine total tackles in the Chiefs’ loss to the Vikings.

Michael Griffin, Titans safety—He made four tackles and had a pass deflection in the Titans’ loss to the Dolphins.

Justin Tucker, Ravens kicker—He’s in a slump for him, having missed a field goal in two consecutive weeks. He did make two field goals on Sunday with a long of 36 yards.

Malcom Brown, Patriots defensive tackle—The rookie logged his most tackles so far with four against the Colts.

Kenny Vaccaro, Saints safety—In helping his team hand the Falcons their first loss, Vaccaro had five total tackles, a tackle for loss and a pass deflection.

Roy Miller, Jaguars defensive tackle—He made two tackles and had a quarterback hit in the Jags loss to the Texans.

Brian Orakpo, Titans linebacker—He put up nice numbers against the Dolphins, despite the 38-10 loss. He made four tackles, grabbed a sack, a tackle for loss and a quarterback hit.

Lyle Sendlein, Cardinals center—Started the Cardinals 25-13 loss to the Steelers. Arizona managed to rush for just 55 yards and they gave up a sack.

Marquise Goodwin, Bills wide receiver—He’s had a tough start to the season, but now it’s over altogether. He suffered a rib injury in Week 5, after coming back from a different rib injury sustained in the preseason, and was put on IR Tuesday after missing Week 6.

Fozzy Whittaker, Panthers running back—He rushed one time for two yards, but he caught both of his targets and gained 21 yards receiving.

Brian Robison, Vikings defensive end—He made three tackles in the Vikings’ win over the Chiefs.

Jackson Jeffcoat, Redskins linebacker—Had a tackle in the loss against the Jets. He was on the field when the Redskins blocked a punt and scored in the fourth quarter.

Cory Redding, Cardinals defensive end—After Week 5’s 30-yard interception return, he failed to log a stat in the Cards loss to the Steelers.

Quandre Diggs, Lions cornerback—Failed to register a stat in the Lions’ win on Sunday.

Geoff Swaim, Cowboys tight end—Was on a bye in Week 6.