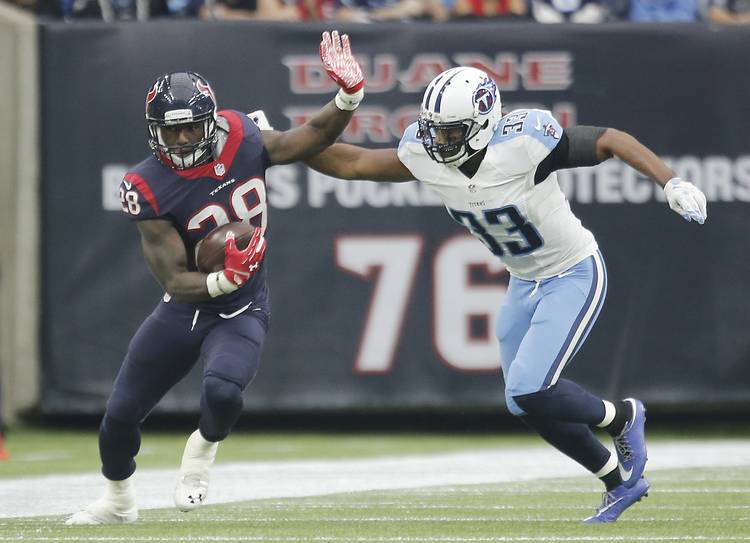 Michael Griffin returned to action in Week 8 and led the Titans in tackles. (Photo by Thomas B. Shea/Getty Images)

Is there such a thing as a former Longhorn? These players will always be Longhorns to University of Texas fans, even though they’ve graduated to the next level of football. Every Tuesday, we’ll update you on how they performed the previous weekend. Here’s a look at the Longhorns in the NFL and how they fared in Week 8.

Justin Tucker, Ravens kicker—The clutch kicker went 5 for 5, including the 39-yard game-winner as time expired, which inspired this celebration. He had a long of 48 yards in the game.

Malcom Brown, Patriots defensive tackle—He had two tackles and a tackle for loss in his second consecutive start as the Patriots won big on Thursday night over the Dolphins.

Derrick Johnson, Chiefs linebacker—He led the Chiefs in tackles on Sunday as they throttled the Lions 45-10 in London. He had five tackles, a sack and a tackle for loss.

Phil Dawson, 49ers kicker—Once again the 40-year old was money as he was 2 for 2 on Sunday, including a 54-yarder. Unfortunately, for the second week in a row he provided the only points for his team.

Michael Griffin, Titans safety—He returned to action in Sunday’s 20-6 loss to the Texans and led the team in tackles with nine.

Brian Orakpo, Titans linebacker—He logged just two tackles, but he also added a sack, a tackle for loss and a pass defended.

Lyle Sendlein, Cardinals center—The starting centered led the way for the Cardinals to rush for 119 yards as a team and protected Carson Palmer enough to allow him to throw for 347 yards and four touchdowns in the 34-20 win over the Browns.

Fozzy Whittaker, Panthers running back—He carried the ball just once for three yards but he also had two kickoff returns for 37 yards.

Quandre Diggs, Lions cornerback—Not too much to celebrate for the rookie in London on Sunday, but he did have two tackles and a pass defended.

Sam Acho, Bears linebacker—He started for the second time this year and picked up four tackles in the 23-20 loss to the Vikings.

Brian Robison, Vikings defensive end—He picked up a tackle and a tackle for loss in Sunday’s 23-20 win over the Bears.

Lamarr Houston, Bears linebacker—He was in on some action but failed to register a stat on Sunday.

Tony Hills, Saints offensive tackle—The backup tackle did make it into the game on Sunday.

Geoff Swaim, Cowboys tight end—He was on the active roster but didn’t make it into the game on Sunday.